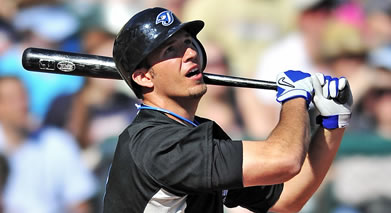 Blue Jays fans got a dose of fantasy this week in a slew of spectacular play from the Toronto team. It was a weekend that sparked the hope that maybe the 4th place team could make  a run at something this fall.

Coming off a series win of 2/3 games at Yankee Stadium, The Jays headed home to sweep 3 games in a row from the brilliant Tampa Bay Rays in some of the best baseball played at the Rogers Centre in years.

Friday saw a pitcher’s duel and a Brett Cecil win of 2-1 over the Rays. There was some solid fielding on the part of the Jays and the fans were in top form hanging on the every move of the closely-locked pitchers. Both Jays runs were unearned, leading to a strange but rewarding victory very much deserved after such a solid pitched outing.

Saturday reversed the situation as the Jays had no trouble at all moving their bats. They triumphed 17-11,  bolstered in no small part by the major league debut of promising catcher JP Arencibia who went 4-5 with 2 homers (1 of which came on the first pitch of his first at-bat).

The remarkable weekend was topped off by Sunday’s nearly-historic 1-0 victory headlined by hero-of-the-hour RHP Brandon Morrow. Boasting only 1 walk with 17 strikeouts, Morrow, a My Sports Stadium favourite all season, narrowly missed the no-hitter honour when superstar Evan Longoria eked out a single past the glove of second baseman Aaron Hill in the 9th inning with 2 out. After the improbable at-bat that ended Morrow’s bid and plagued the conscience of the All-Star second baseman who let him down (Hill says he wishes it could have been called an error on him instead of a hit against Morrow), the Jays went on to win the game one out later. The game put Morrow on the league map, brought him 1 strikeout short of the club record of 18 and clinched the 3 game series for the Jays. And there is something to be said for the comfort of knowing that one and only hit came from one of the best players in the league.

Fans came back down to earth tonight after a solid effort saw the Jays come up short in a 7-5 victory for the Boston Red Sox. Travis Snider’s 3-run homer brought the house down but ultimately Ricky Romero didn’t bring his A game and Shawn Camp couldn’t make up for it. The reality of being 9.5 games back with 3 teams to beat in the toughest division in the league came crashing down. But for awhile there, and maybe even a little bit going forward, that little spark of hope is a fantasy it would do Toronto some good to believe in.