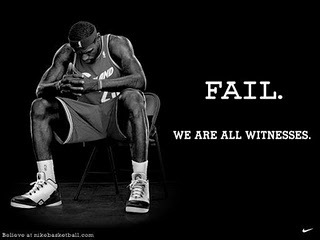 How Lebron killed his career and the NBA as a whole

The Lebron saga has been hashed, rehashed, debated, analyzed so much that I almost feel bad adding to the endless space on the internet already devoted to the subject. This is way past beating a dead horse; it’s been beaten to death and then beaten again until the corpse is mutilated beyond recognition. But that was LEADING UP TO “The Decision.” Now that the decision’s been made, I’ll get in my say before it can be murdered anew.

I am, of course, personally disappointed. I very recently thought of Lebron as the best basketball player in the world, and more importantly, I thought of him as a class act. I thought of him as an incredibly talented individual, but more importantly an unselfish player who played for what was best for his team, not for himself. I saw him put up triple-doubles and whenever talking about the greatness that was Lebron I would focus more on his assists, his hustle, his defense, and his team chemistry more than his points scored. I openly professed how he made the players around him better, how he was a leader, and how his play-making ability and team-oriented decision-making on the court was just as impressive as his personal talent. I admired his clean record (no criminal allegations, never seen hanging out with the wrong crowd, always family and team-oriented) and his hometown-hero story. I always thought he was a fantastic player who came up just short because of external factors and some bad breaks, and that he himself was wholly not at fault for any failings of his team.

While his skill will only improve over the peak years of his athletic career, I will never be able to admire him the same way. Perhaps one day I will be able to again appreciate his athletic prowess the way I grudgingly recognize Kobe’s, despite my own misgiving on his character, but I don’t believe I will ever be able to have the same glow I used to have when talking about Lebron.

He was so recently the perfect athlete; on pace to be perhaps the greatest player in the history of his sport, with the character and off-court demeanor to back it up. He was the poster-boy for the NBA; the now and the VERY bright future of the league. He was America’s player, and unless your team was playing against the Cavs that night, it seemed like everyone was rooting for him. But that is in the past. The reason it seemed to good to be true is that it was.

Lebron’s decision to sign with Miami is disappointing because of what it says about him as a person and how drastically it changes the perception of him around the country. It may seem to him unselfish to take less money to go to Miami for the sake of winning, but this process and his eventual decision has shown that he is far more selfish than I considered possible.

It is not only what he’s done but how he’s done it. He has dragged this process out into a production unlike anything I’ve ever seen in sports (or entertainment, and that’s a whole new level of narcissistic self-celebration). He has tried to make himself the center of the universe and has done what no athlete should ever do: put himself above the league. On SportsCenter‘s bottom line (a scrolling bar of headlines and scores at the bottom of the screen) there were news tabs for “MLB,” “NFL,” “Tennis,” “NBA,” and then “Lebron.” The NBA put itself on hold for Lebron, or more accurately, Lebron made the NBA put itself on hold for his courting process and eventual decision. He had power and influence over the NBA’s organizations more than any entity, with the exception of the Commissioner’s office. The media contributed to making this circus act what it was, but Lebron initiated it. He started the fire and kept on feeding it.

Cleveland admired him in a way I have never seen elsewhere in my entire life. As a Yankees fan, I think of how devastated I would be should Derek Jeter ever leave the Yankees. I think of how betrayed I would feel if one of the most talented, well-charactered, and maybe the most popular Yankee player ever left New York for another team. But not even Derek Jeter holds the importance to New Yorkers that Lebron held to Cleveland. Jeter is from Michigan, not New York City, and it’s not like the city of New York went 50 years full of heartbreak until he came along. There is simply no parallel to how important Lebron was to his city. He was by far more significant to Cleveland than any other athlete in any other sport anywhere in the country. And then for him to betray his home following a two-year buildup, with a month long period of the NBA humiliatingly “groveling at the feet of the King,” and then with a nation-wide hour long TV special celebrating his betrayal of his home, of his NBA-family? I can think of no crueler way to rip out the heart of Celvelanders and spit on it.

If you thought Johnny Damon or Roger Clemens had it rough in Boston after going to the Yankees, you’re about to have your perception of public hatred blown off into the next state, specifically Ohio. For a taste of this spectacular switch from Deity to the most hated Athlete in America, read Cleveland Cavalier owner Dan Gilbert’s letter to Cavs fans here or watch the jerseys burn:
here
here
here
here
or here
The videos go on and on.

But perhaps what disappoints me the most is what Lebron showed about his character and priorities. He showed winning was his number one,  at whatever the cost. In some cases this would be admirable, but he put the RESULTS of winning over the journey. He put more stock in the Championship trophy than he did in the competition it takes to get there. That is what is most disappointing: Lebron showed that winning is more important to him than competing. He showed that winning is more important than EARNING what you win. He showed that the appeal of winning many empty championships is more important to him than working for one that would mean the world. A championship ring means nothing without the fight to get there. Without the fight, what value does the victory have?

What makes the legends of the game so great is their will to dominate; their passion to compete. What makes Kobe arguably the greatest player playing (I can’t believe after years of fighting for Lebron I’m on Kobe’s side in this argument now) is his will to win, that he wants it more than anyone else and refuses to be stopped. What makes Jordan the greatest player of all time is that he would not be denied victory. He would win because he would out-compete entire teams. The greatest players are great not great because of the numbers they put up, or the championships they win, but because of the drive they have that was responsible for the championships, and the will to out-compete everyone else on the court. In joining this super-team, Lebron has forfeited his place as a great player, because he has forfeited his place as a competitor. He’s jumping on the bandwagon to make his path to a trophy as easy as it can be. Lebron showed that having a ring on his finger for something he barely has to work for is better than fighting for what he wants. Or maybe he’s shown that he simply doesn’t have that competitor’s spirit to do it himself and needs to tag onto Wade and Bosh’s efforts to finally win a championship. When a player puts the trophy before competing for it, he ceases to be a role model and loses the right to be considered one of the best in the game.

But despite all this, I almost feel sorry for Lebron. I have never seen an athlete commit more overt and permanent career suicide as Lebron did tonight. This is as much of a lose-lose situation as I can imagine. The expectations for Miami are to win it all. Now. Next year. Every year these three are together. Dominating in the regular season isn’t enough. Winning 80 games won’t be enough. Winning a title won’t be enough. If Miami wins 3 championships in the next 5 years, Miami fans will be wondering why on earth they didn’t win all 5. Miami is expected to win, and if Miami doesn’t win EVERYTHING, ALL THE TIME, then they, and especially Lebron, will be criticized perhaps even more than he will be in the next several days for signing with Miami in the first place. People will say if he can’t win with THAT team, then he can’t win. Period. And if he can’t win with that team then we have all greatly misjudged his potential and his skill as a player. If he doesn’t only win, but DOMINATE throughout his time with Miami, he will be the biggest joke in the NBA, maybe in all American sports. The magnitude of this free-agency circus certainly won’t help mitigate the ridicule he’ll face for failure.

But even his best case scenario is a terrible one. Say he wins. Say he wins a lot. Say he even wins 5 championships in 5 years and steam-rolls the rest of the league. Even then, he loses. They’d say each championship was practically given to him, that he had the deck stacked in his favor as much as it could be, OF COURSE he won, why should he be given credit when he barely even had to work for the success? Each championship will be empty, boring; just another number. No pride, no excitement, no passion. Nothing that even closely resembles the kind of fire and passion that a championship should have (THIS kind of passion).

And the more he wins, the more the rest of the country roots against him. The easier it is for him, the more unfair it is for every fan of an NBA team other than the Heat. The more dominant Miami is, the more meaningless is the play of every other organization who suddenly doesn’t have a chance against the monopoly that is the Heat. And the more success Lebron’s super-team has, the more desolate he leaves the NBA as a whole. The potential for the lack of competition, the lack of excitement, the absence of meaning to any games will all hurt the NBA in a way that no scandal could ever do. It will do more damage than the steroid scandal ever did to baseball. It will kill the league.

If Lebron loses in Miami, he’ll have brought the whole world’s focus on him just to watch him fail in the most embarrassing way imaginable when he had the equivalent of a Yahoo! Fantasy League team playing with him. And that’s probably the best he can hope for. Because if he wins, if Miami dominates the way everyone expects, then he becomes the enemy of every basketball fan outside of Miami and he becomes the murderer of the NBA’s competitive integrity. He will be the man who not only put himself above his home, but worse, above the league, and above the sport. I’m hoping for Lebron’s failure not only for the satisfaction of the country, but for Lebron’s sake. Success would prove to be even worse.