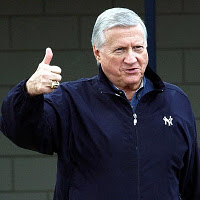 George Steinbrenner was the most infamous man in baseball. A controversial and dedicated owner, Steinbrenner changed the Yankees and subsequently the face of the sport forever. He lived and breathed by a winning record, sank historic amounts of money into the team (elevating the Yankees but belittling the fair playing field) and demanded nothing less than World Series success. He was temperamental and passionate, a bully, a leader and ultimately the man behind the most successful baseball team in the world.