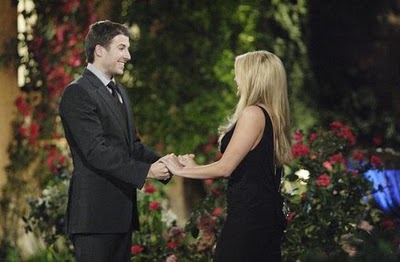 Ali eliminated one of my favourites on The Bachelorette last night without ever speaking to him. The Vancouver cutie, Chris H, left without a rose at the end of an episode where he wasn’t featured at all. He went on the group date (one of 12, we never saw him), wasn’t interviewed, we saw no one-on-one time between him and Ali and he even left without an exit interview, we never even got to see him say goodbye to Ali. He just left. We didn’t see him walk out the door or say goodbye to the guys or anything. I had to watch the rose ceremony twice just to make sure he had in fact been eliminated. With most coverage focused on the idiotic Craig M (eliminated) and the immature Jonathan (still there), the weird ignoring of Chris H isn’t on anyone’s radar. But I thought it was really odd. Even the anonymous Tyler got to say a sentence or two on his way out.

Oh well, with the cutest (and only mostly sane) Canadian gone from the show I’ll have to start expanding my search area to include the guys from blue states. That leaves me liking Frank a lot (I know, the editors want me to). Glasses always win me over (see: Reid), not to mention screenwriters. But he may get on my nerves, we will see. Also, the first date guy is always an early front runner and rarely wins- we’ll see. Jesse won’t be around much longer I don’t think. Neither will Jonathan (the weatherman) or that annoying guy who keeps picking on Justin. Speaking of Justin, he’s either adorable and misunderstood or absolutely crazy. I’m hoping for the former and worried that it might be the latter. My money’s on Roberto to go the full journey though. I’m thinking this might be a Trista and Ryan situation, where she knew who she wanted on night 1 and went through the motions until she could have him. We’ll see.

But still, what went wrong with Chris H? And why was he the invisible man?