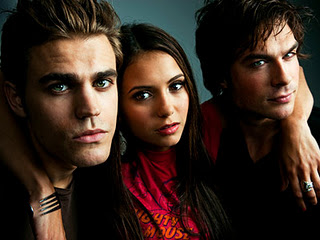 Perhaps you’ve wondered why my once verbose self has taken a self-imposed hiatus from blogging. Or perhaps you wonder why we drive on the parkway and park in the driveway. Either way, pipe down.

What could have pulled me out of semi-retirement? A grandiose examination of the themes of Mad Men Season 3? Barely made my typing finger twitch. An exploration of the ramifications of Dollhouse’s series finale? Not falling off the wagon. A startlingly profound rumination on the second to last season of ABC Family’s surprisingly wonderful Greek? Not exactly.

No, the answer is, as always, hot guys with their shirts off. In other words, it’s time to reflect on the return of The Vampire Diaries.

Now if the mere phrase “Vampire” is enough to make you start humming the Buffy theme song in protest, I can hardly blame you. Our culture has become painfully saturated with the pale, blood thirsty types. In fact, when I first started watching the CW’s freshman show about good looking people with the strong urge for blood, I wondered if perhaps, like a vampire’s victim, I was just being held under some sort of vampire glamor.

But the thing is, Vampire Diaries has really, really grown on me. What started off as Buffy or Twilight -lite has actually turned into a show that is worth delving into, week after week. It’s a show that consistently surprises and engages me, even as it plays with its teen soap and horror foundations.
So here are, in no particular order, the five most compelling reasons to visit or revisit The Vampire Diaries:

ALSO, fun fact: : if you google image search Vampire Diaries shirtless, there are at least five pictures of a shirtless Taylor Lautner. Sometimes, blogging is really its own reward.