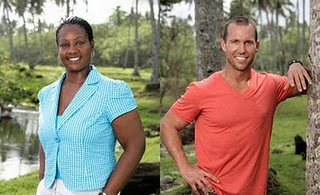 Week after week the one show I look forward to consistently is Survivor. Usually, after watching an episode on Thursday night, I’m filled with observations, frustrations, and strategy-talk which I’m desperate to discuss. This week something different happened…this week I was at a loss of words…this week a part of my Survivor soul died.

Don’t get me wrong, last Thursday’s episode was the epitome of why Survivor kicks some serious ass, but the outcome left me simultaneously sour and impressed. There’s nothing worse than watching you top favorites take each other out and unfortunately no matter what the outcome on Thursday, that was bound to happen.

The episode began with some very entertaining (albeit annoying) words of sorrow from Coach who felt left out from the tribe. In typical middle-school fashion, the dragon slayer began to cry over the fact that nobody likes him. Frankly, I would sympathize with the man had he not added the bit about how he is the only moral person playing the game. It’s one thing to feel left out but it’s another thing entirely to gloat about yourself in the process. In typical Tyson fashion, he supported Coach throughout the breakdown and then made fun of him to his entire tribe the next day. Someone please get rid of Tyson.

Okay, back to the problem with this episode/what made it really entertaining. Once again the Heroes fell victim to poor team work. And by “poor team work” I mean they fell victim to Rob who has single-handedly won every immunity challenge for the Villains. Immediately, it looked like Tom or Colby was heading home since they are still on the outs after their alliance with Stephenie (R.I.P.). Luckily, this week they also found a clue to the hidden immunity idol and Tom easily found it. I truly believe Tom may have pulled a fast one on them had his acting skills been a bit better and his stealth a bit sneakier. Sadly, Amanda saw that Tom was acting strange and noticed him place the idol in his socks. But if you are a fan of Survivor you know that the threat of the idol effects the game much more often than the actual idol does. Tom wisely uses the idol as a bargaining tool when he promises to help Amanda and J.T. with it in the future if they will merely let him and Colby join the popular gang (you can just here Coach in the background whining about not fitting in….find an idol and you will!). Amanda and J.T. easily are persuaded to let the men in and it’s quickly decided that Candace will get the boot.

Then the fatal flaw happened. Cirie, in her infinite strategic ways, realized that Candace leaving would mean she was next. Here’s the thing about Cirie: she is the most strategic player to ever join Survivor. Unless you’ve seen every single season, you can’t even begin to challenge that statement. Cirie made it to the final four twice because she knows how to manipulate others into doing things that really only benefit her in the long run. Getting rid of Candace would help the tribe because not only is she sort of on the outs but she also is not a superb competitor. Keeping Tom and Colby would only strengthen the team during challenges. I’ve said it before and I’ll say it again: on a season with all-stars the most important thing to do is keep a strong team initially and then get rid of the physically strong players after the merge. Cirie however is not a physically strong player. Sure she can easily destroy the girls during one-on-one combat but she has never been great at the running, swimming, climbing aspect of the challenges. Cirie therefore immediately realized the impending threat against herself and tried to convince Amanda to change her vote. Surprise: it worked! Cirie knows how to manipulate. So why was she sent home last Thursday?

Two reasons:
1/ Fear. Cirie is perfect at manipulating players when she talks to them alone but unfortunately she heard about the plan change in front of three players. She quickly let fear get the best of her and started spewing out strategy without remembering her strong suite: personal, intimate relationships and conversations. Sadly for Cirie, J.T. also overheard from afar and observers of Cirie can easily see through her manipulation if they pay attention carefully.

2/ Fear. Okay fine, that’s one reason but trust me it’s used in two different ways. Cirie may have been in trouble because of her own fears but she was destroyed because of J.T.’s. Even before the game begin, during the entrance interviews J.T. said he would be targeting the most strategic players such as Cirie. He specifically stated his desire to see Cirie leave first and he found the opportunity to send her packing. J.T. won this game because of his own strength and strategy yet he fears Cirie because she is the greatest strategist to ever play this game.

So why am I so upset? Cirie deserved to make it much longer this year. I’m so used to seeing her in the final four that it just became a presumed outcome. She also is the one of the most lovable players to ever join the game, and sadly newcomers to Survivor won’t notice that because she was given little air time this season. On the flip side, seeing Tom take out the idol and seeing J.T. shock the entire tribe by switching his vote will go down in history as one of the best tribal councils ever. Also, on the plus side Tom and Colby are back in the game and deservingly so. If they can grab Candance on board with their alliance then they just might make it to the merge; however, I predict if the heroes lose again they all will unanimously vote out Candance simply because it’s an easier bet. Only time will tell.

Side note: Rob I love you but the macho speech to Coach about his need to stop crying and “be a f***ing man” was a little too much, even for you. I realize you are the epitome of a “man’s man” but I like to pretend you can also have a soft-side and I really hope you wouldn’t say things like that to your son.