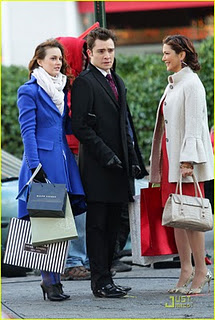 Gossip Girl is one of the few scripted shows I actually look forward to week after week. After a few month hiatus, the show returned a three weeks ago to some less than stellar episodes.

Things I Don’t Care About
1/ Chuck’s Mom- Each episode has been primarily focused on two plots and the one involving Chuck, for once, bores the heck out of me. For three episodes, we’ve been asked to reexamine whether or not this mysterious woman with the annoying accent is in fact the bad boy’s biological mama. Can we all just agree that in a year it won’t matter who it is, and chances are Chuck will not be effected by her presence in the long run? Furthermore, if she is the mother, why hire such a boring and horrible actress? She may look like Chuck but she sure as hell is not as charismatic on screen. The only way this story can improve is if mom becomes a raging she-devil and wrecks havoc on Chuck and company.

2/ Jenny and Damien- I mean, let’s be honest, I don’t care about Jenny period; however, the introduction of Damien (Kevin Zegers) was an exciting addition mainly due to the actor’s previous credits. All went to hell, once again, when Damien proved to be a one note character whose only role is to cause more rifts between the adolescent rebel Jenny and her amazing father (who would ever argue with such a good father?). Jenny has always been a thorn in the show and she continues to prick at the decent drama which is left…hopefully.

3/ Nate and Serena’s constant sex- These two start every episode enthralled in passion. It’s nice to see both of them happy for once but the constant sex is clearly hinting toward an entirely physical relationship void of any real emotion. Nate’s love for Serena has been clear since the whole Tripp scandal, and even further back since the premiere episode, so his side is acceptable. Serena, on the other hand, is back to her meaningless self and she is with Nate for all the wrong reasons. As much as I hate to admit it, Serena was the least annoying with Dan and hopefully these two will resurface again soon.

4/ Serena’s Dad- Until Mr. Baldwin actually surfaces as the father, all talk of him needs to cease. I’m sure with an entertaining actor as the character, Mr. van der Woodsen will prove to be a welcoming addition to the show, but for now he’s causing too many dumb arguments. Lily and Rufus have a wonderful love story and to ruin it by some dead-beat dad is ridiculous. Furthermore, Lily’s confession about the kiss just seemed like a lie. Chances are it was based on her recent conversation with her mother in which she was told that Dr. van der Woodsen was the best man to administer the tests. Is Lily sick? I hope so, or else once again we have a disappointing plot.

5/ Dan and Vanessa- Sometimes they’re cute. Most times they aren’t. Bringing Dan and Vanessa together further demonstrates my lifelong assertion that straight men and women cannot be friends without some sexual attraction. Sadly, the audience knows Dan and Vanessa won’t stick so the relationship is often painfully awkward to watch.

6/ Eric- I just miss him. I still think he is an incredibly underrated character who should be bumped to series regular status.

Things I Like
Okay, I admit, I was writing this post while watching the latest episode and in the end it turns out Mama Chuck is actually heinous bitch…I’m kind of excited.