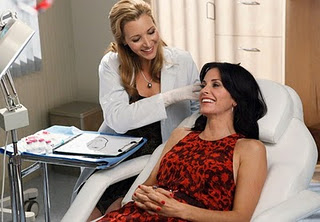 Wednesday night comedy is back. And I’m still on board.

After the holiday hiatus, both Modern Family and Cougar Town returned tonight with new episodes. I spent the majority of the day catching up on the latest episodes (give a guy a break…apparently re-watching the entire series of Lost takes some time). Based on the last few episodes and the two most recent ones, I’ve arrived at the same conclusion: this is my new favorite comedy hour.

Don’t get me wrong. I still appreciate Thursday comedies over at NBC but lately I just find myself deleting them from my DVR. The Office and Modern Family are clearly on the same page since their both half hour sitcoms focused on this new documentary style. And my guess is I’m not the first person to notice the obvious resemblance between Michael Scott and Phil Dunphy (or maybe Phil’s more of a Michael/Dwight hybrid…scary thought). And looking back I cannot help but compare the outlandish comedy of Cougar Town to that of Scrubs (I swear it’s not because of Christa Miller). It’s just nice to finally have an hour of comedy that takes me away from everything. Now, if these two shows would just switch over to CBS’ Monday nights then my life would be complete.

Now a lot of critics are on the Wednesday comedies bandwagon, but the confusing thing is most of them rave about Modern Family while Cougar Town gets little love. Week after week I’m counting down the minutes until the family sitcom ends. Granted, I still love Julie Bowen’s character, find Sofia Vergara perfect for her role, cannot get enough of the gay couple, and ADORE the children (since when do sitcoms have good child actors?!?)…but these guys got nothing on Courtney and her crew. It’s hard to pinpoint exactly what makes Cougar Town so enjoyable but I think a big round of applause goes to the casting directors. For once, there’s not a single character who bores me on screen.

This weeks Wednesday night line-up was all about the guest stars, and they could not have been cast more perfectly. It started off with Benjamin Bratt showing up as Gloria’s ex and Manny’s father. After severely disappointing Manny for years, Javier admits that he’s reluctant to come because of Manny’s new step-father Jay. After some manly bonding Jay becomes just as enamored with Javier as his wife used to be. It’s clear from the beginning that Javier is a bit of a bad ass and not the typical good guy, but Bratt plays the role seamlessly and he slowly gains trust from not only Jay but the viewers as well. It’s hard to imagine Gloria being in love with any Javier other than Bratt’s.

Half an hour later on Cougar Town the big guest star of the night was Lisa Kudrow playing the horribly bitchy Dr. Amy Evans. The episode followed Ellie and Jules on their routine visit to Dr. Evans for a little botox. Once again perfect casting decisions were made as Kudrow delivered her lines with comedic sarcasm and attitude (slightly resembling Friends’ Ursula but even wittier and bitchier). As the episode continues Jules learns that the doctor is actually dating her ex Bobby. A few awkward double dates later and you have yourself a hilarious episode with a much appreciated, thought out use of Kudrow’s acting abilities. Another familiar face this episode, marking his second in a row, is Felicity‘s Scott Foley who plays Jeff, Jules’ first appropriately aged boyfriend this season. It seems like Foley’s only signed on for one more episode but so far I’m loving his relationship with Jules. The two have not been center stage yet in any of the story arcs but rather act as a comedic duo in the background. Foley impressed me just as much as Kudrow and I think we’d be more than lucky to have either of them back on this hilarious show.