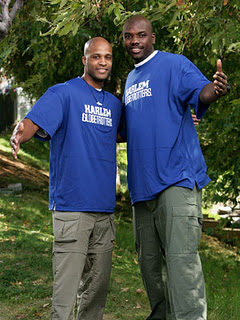 Something strange is happening this year in television…specifically reality television. For the first time in forever, my favorite contestants are making it to the finals and winning. Typically I have my favorites which I route for throughout the season and they tend to get close to the end but never really make it. That has been flipped upside down this year starting with Big Brother and continue with Top Model. In both instances I watched the finale with an unusual amount of carelessness because all the finals were deserving (granted I was probably leaning a bit more toward Laura winning over Nicole and Jordan winning over Kevin, but either way it was okay).

Well, my favorite picks are continuing to surprise me with the best final three in Amazing Race history. I’ve been obsessed with the race all fall and I’ve rediscovered why it is the only reality show to continuously win the Emmy. From the beginning, I was routing for the brothers and the inter-racial couple. While both these teams have proven to bicker and annoy me at times, they have also continued to entertain throughout. Sure Sam and Dan scream at one another more than any team this year but their friendship clearly overpowers any sibling rivalry. I just about cry every time the two make up. And while Ericka tends to bitch and moan at every roadblock, her relationship with Brian is nothing but pure adorableness. The two are clearly meant for each other and I cannot remember seeing such a strong couple ever on this show. Arguably, Meghan and Cheyne are clearly the strongest team in the race, and the favorites to win, but Meghan tends to be more annoying with her constant desire to scream her boyfriend’s name. The fourth pair left in the race were the Harlem Globetrotter’s. While these these are obviously a favorite of the production team, they left me with a bitter taste in my mouth. As the cockiest players this season, it came as no surprise when the pair butted heads with the other teams constantly. Furthermore, it was a huge laughing riot when they accused Dan of pushing them when the footage shows the Globetrotters at fault.

With my new found reality luck, the Globetrotters were unable to unscramble the letters in the name Franz and took a four hour penalty. Dan was initially working with Big Easy to solve the clue but went back on his word by refusing to give the correct answer. This was the second time the self-proclaimed villains cause delays in another teams game (they stole Ericka and Brian’s cab last week causing their last place finish in a non-elimination round). Is this poor gamesmanship? Of course not! In a race around the world for one million dollars, it’s necessary to fight for your team in any way possible. With the brothers finally destroying the basketball players, Ericka and Brian were able to overcome their last place finish from the previous week and slide into the final 3.

Who will win this season: the dominating dating duo, Meghan and Cheyne, who continue to destroy the competition week after week, the bickering brothers who manage to finish near the top regardless of their constant fighting, or the interracial couple that has placed last in two non-elimation rounds and are the clear underdogs? More importantly, who cares? With three deserving and entertaining teams, I’ll be satisfied with any ending.