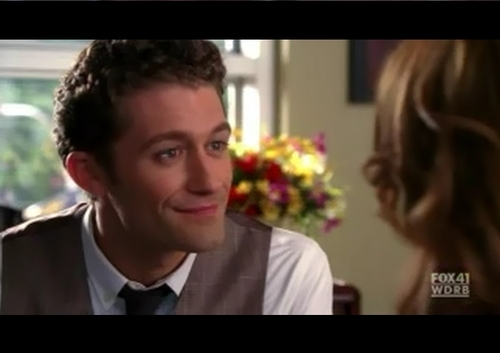 I can’t think of two shows more different in style than The Office and Glee, yet this week’s Glee gave me exactly that, “Oh s—, I simultaneously wish this wasn’t happening and can’t stop laughing,” feeling that is the Office‘s stock and trade.

Most of it, especially the Rachel and Mr. Schuester stuff, amused me.

But I have a pet peeve. I really like the character of Mercedes, or at least the potential there, but this week the show asked her to play “sassy, black voice of reason” and it was just obnoxious. First, it was obnoxious because “sassy,black voice of reason” is a ridiculously overused cliche, and this show should not be falling into it this early. But, more importantly, overall, the show’s relationship with fatherhood (with the notable exception of Kurt’s dad) is ridiculously lacking. I’ve found the whole “Finn thinks he’s the daddy but it’s really Puck” thing intriguing, but the idea, as expressed by Mercedes, that Puck “owes it” to Quinn to keep his trap shut about his spermination of her is just… well, backwards, misogynistic bullshit. It takes two people to make a poor sexual decision, and judging by the ridiculous amounts of sparks that still fly when Puck and Quinn are in the same room, I’d say that was a very much so mutual moment of condom-less lust. And Puck has a right to tell Quinn this. He didn’t “ruin” her, because this isn’t the 1950s, and the whole point of feminism was that women have their own sexual rights and impulses.

Plus, Puck totally loves her. It’s not just like he used her for sex and now wants nothing to do with her. He was willing to sell pot cookies for her (that’s noble, right?). And he’s just so dreamy, he should be given the opportunity to do the right thing.

On top of that, Finn’s a damn nice guy. He protected Kurt way before they shared a mutual love for high notes! He sings to sonograms! He gets a job to support his pregnant girlfriend (Admittedly by pretending to be handicapped…)! Mercedes reaction should have been pissed as hell that Quinn was letting Finn give up his whole life for a baby that isn’t his, and that Quinn was continually lying to him about the fatherhood of said baby. When the Glee club decided to sing to the two “parents-to-be” I should have felt moved (and I suppose a part of me did), but instead I mostly felt pissed off as hell that the song wasn’t “it’s not your baby” (which I don’t know if that’s a real song, but it should be, for just this reason).

It’s interesting because I mostly agree with Kelly’s theory that the show is sometimes to quick to paint Quinn as a villain, and I greatly prefer the episode’s like this week when Quinn is given layers and sympathetic monologues, but it pisses me off that the show is just writing off what a hugely messed up thing she is doing to Finn. Every time I see her berating Finn or letting him make huge life changing decision based around a baby she is planning on giving up for adoption that ISN’T HIS ANYWAY I want to vomit and/or punch my television. I like when characters are complicated, and that means exploring the good with the bad.

Overall, I liked this week’s episode a lot more than this monologue would imply. I especially liked the introduction of Finn’s mom and the shirt that Puck was wearing in his scene with Mercedes (it helped to make me feel better about how annoying the storyline was, ‘kay?). Still I’m looking forward to all the baby-related secrets coming out, because they frustrate me so badly.