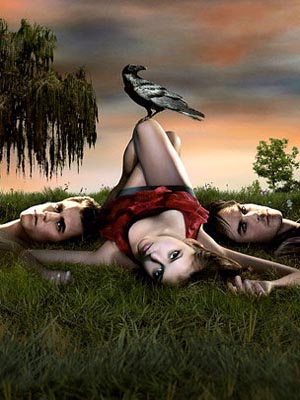 The Vampire Diaries is my number one guilty pleasure tv show, a better scripted, equally-well-ab’ed Twilight for the slightly older set. But the thing that actually elevates it above other crappy guilt fests? Ian Somerhalder. As Damon, the bad boy older brother vampire, he’s having so much damn fun that you want to have fun right along with him.

Plus, the show doesn’t take itself and its mythology over serious.

It still has a serious charisma hole at its center in the form of Elena, and although they both look good shirtless and do good “smoldering eyes from across the room,” Elena and Stefan’s compatibility never seems more than looks based. And I still wish that a single female character ever seemed fully formed (I’m pumped about witch-girl, and Elena’s sister has potential, and ditzy blonde Caroline is actually shaping up to be my favorite, but there’s still not a relateable, root-for-able lady amongst the lads).

But the guys in the show are where the action is at, which I guess is how I can tell this is a crappy CW show and not a brilliant genre-defying masterpiece by Joss Whedon. Although Somerhalder is the stand out among the bunch, Paul Wesley as Stefan does more with his cheek-bones and ridiculous abs than Twilight ever allows Robert Pattinson to do. The episode where his female vampire best friend shows up and Stefan finally lets loose and gets goofy with his bad self, Wesley is practically aglow. And it’s this air of mischief behind the “brooding good guy” that kept Angel alight for three years on buffy and five on angel (it’s also what’s missing in Edward Cullen, although that’s a subject for a much longer and ridiculous post). Even recurring characters like Logan (newscaster-turned-vampire-slayer-turned-vampire) are so much ridiculous complicated bad guy fun that it keeps the show afloat.

On top of that, the plots are actually pretty decent. The slow roll-out of the vampire mythos, the building of the town conspiracy, even the goofy-witchcraft-ghost-epic-love story works well with the show’s semi-ironic aesthetic. Just look at the goofy trailers that the CW puts out to promote the show (randomly shirtless boys, mirror talk a la “It’s cool not growing old. I like being the eternal stud.” ~wink~, admissions that the show is basically 90% longing looks) to see a pretty honest view of how the show sees itself. It may be Dawson’s Creek and Twilight’s awkward love child but at least it’s self aware enough to know it.

All of this is basically a plug for CW’s Vampire Diaries marathon starting on December 5th, where you can catch up on all the ridiculous shirtlessness in one wonderful week.