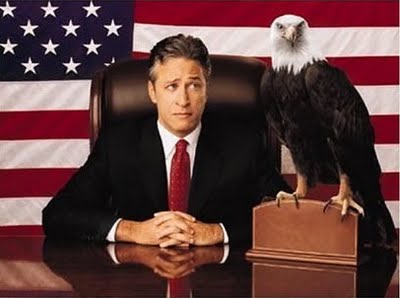 Tonight One Tree Hill came back, so did Gossip Girl and that terrible idea that is the Jay Leno show premiered. But the real good news of Monday Sept 14? The return of The Daily Show.

After an annoyingly long 3 week hiatus, Jon Stewart returned to TV tonight in fine form; and boy was it ever nice to see him. Because when the country is spinning in all sorts of unpredictable directions and TV news bias is at an unprecedented high and people are standing up and yelling at the president for trying to pass a health care bill, it’s nice to know that the guy voted “most trusted newsman since Walter Cronkite” is still on the job.