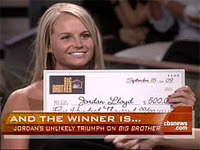 And The Winner Is…..wait, really?

So I love Big Brother. The only think I hate about the show is that my favorites never win. Ever. This season was a first for me in that I didn’t really have a favorite. But I should explain what favorite means to me. For me, favorite means somehow who deserves to win (meaning they played strategically and physically) and somehow who I genuinely like as a person (or, ya know, television persona). Of the previous ten winners, the closest to a favorite I had was Dan. The only reason I can’t fully include him as a favorite is because I’m still bitter that he and Memphis turned on Keesha (my true favorite that season).

But now, after the finale, I think I have another almost favorite to add to the list.

Going into the finale were three distinct personalities: Kevin, Natalie, and Jordan. These were never my ideal finale three (I would have preferred a Russell, Jeff, Jordan, and Michelle final four) but there was officially only one person I hated: Nasty (or Natalie as some of you may know her). Kevin was probably the most entertaining character to watch this season and on top of his humor he kicked as strategically and in competitions the last few weeks. Jordan also stepped up her strategy and competition in the end, but to a much lesser degree. Natalie stepped up….well….actually…no she did nothing. As long as Jordan or Kevin won I would be satisfied.

Then something interesting happened. As the final two in contention for HOH, Jordan and Kevin both made finale two deals with each other and Natalie but told the audience their real plans in the diary room. Kevin had his heart set on bringing Jordan because for some idiotic reason he believed that Natalie would destroy him in the jury vote, but in his defense he had no clue that the jury hated Natalie. Jordan had her heart set on bringing Natalie because (surprise!) she is actually incredibly intelligent and realized that she would never win against Kevin. So in either scenario it was clear that Jordan was going to the final 2. If she won the HOH, she would win the game. If Kevin won the HOH, he would still probably win, but the vote might be closer.

Now, if you read this blog you’ll notice that both Kelly and I have strong opinions and attachments to Big Brother. So as we were watching the finale together we had both discussed in detail how Kevin deserved to win hands down and that he needed to win the HOH to secure himself the half a million. But suddenly something really weird happened. When Jordan got the question about Jeff wrong and it brought the score to a tie, Kelly and I both yelled at her and got really sad. Suddenly we were routing for Jordan to win the HOH. But then I gave up hope once it came to a tiebreaker and I said audibly, “well she sucks at math so she just lost.” Well, wouldn’t you know that Jordan was off by one digit and she took the competition.

I could go into detail about Jordan’s terribly public speaking and the annoyingly bitter jury but in the end it was no-brainer. With a 5-2 vote Jordan won and I oddly could not be happier. How did Jordan do it? I think she was likable. The girl won us over in a 2 minute HOH competition…if she has that kind of power it’s no shock that she won over some of the jury members. Granted, she was the far better competitor among the final 2 but still it’s reassuring to have a sweet and mostly trustworthy player win.

Cheers to Jordan for being the biggest underdog to win Big Brother. And cheers to Allison Grodner for anything amazing season…we’ll see you next summer.