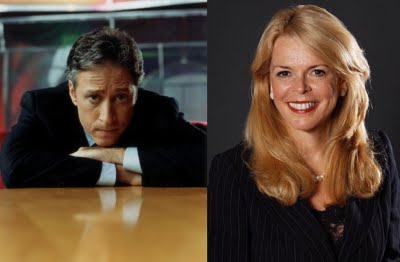 Another One Bites the Dust

In his final episode before a long hiatus, Jon Stewart was in top form this week as he launched into one of his trademark “so long you need to view it in its entirety online” interviews with someone who disagrees with him (see also Jim Cramer and Mike Huckabee).

To top off the health-care heavy back half of the season, The Daily Show welcomed Betsy McCaughey, the woman charged with igniting the frenzy over the so-called “death panels”. The interview was the perfect capper to a somewhat dull run of uninteresting books and endless segments about health care crazies and FOX news coverage.

Betsy McCaughey went into the interview knowing what she was getting herself into, comedy-wise. So, unlike many an author of a boring book Jon didn’t bother to read, she didn’t balk whenever he poked fun at her. Rather, she was willing to laugh at herself and played to the audience for fun. She even used them a bit, fighting hard for her side of the health care debate, she regularly appealed to the audience to back her up as she vehemently pursued her points. Unfortunately for Ms. McCaughey, she did not seem to know what she had gotten herself into intellectually.

Watching some of the more uppity guests on The Daily Show is like watching a slightly dim American Leaguer attempt to avoid getting thrown out at first on a double play against the Jays- you’d think someone would have warned them about Aaron Hill’s arm by now. Similarly, the number of “intellectuals” who seem to come onto the Daily Show set prepared to breeze through a shallow comedy interview is astounding- you’d think one of them might have noticed that Jon Stewart’s the smartest guy going: he WILL have read the bill, you WON’T be able to smooth-talk your way around the issues and he WILL make you look like a fool for assuming otherwise.

Such was the case with Thursday’s entertaining health care debate: McCaughey put up a good fight, desperately trying to shout Stewart down, but got hammered anyway (mostly because she was simply wrong in the first place) and Jon Stewart, having pretty successfully proved that McCaughey was completely misreading the bill, seemed to step away from the whole thing with a “ok, who’s next?” attitude. That is, after all, how the smart kids do it, and Jon Stewart is definitely the smartest kid in comedy class (and all the other ones for that matter).