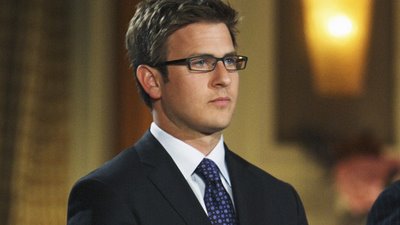 Annoyingly, this week was the turning point in a story that’s been developing for weeks. It’s the story of my love for The Bachelorette‘s Reid.

It started when I figured out that he was a different person from Tanner F and Mark. It kicked into gear the first time he wore his glasses on camera and reached high speed the day before his one-on-one date when he chatted with the train staff, asking their advice for his upcoming date. His adorable family, his charming neurosis and his cuddly nature were the icing on an already pretty fantastic cake. Then there’s the fact that he never knows the right thing to say (which I, inexplicably, always find endearing).

This week was also the first time I haven’t loved Ed. I swear it has nothing to do with the “lack of chemistry” incident on the overnight date. In fact, I felt really bad for him so was inclined to give him extra points just for the brave face. No, overall he was just off this week. For the first time, he was the least attractive guy there. Firstly, Hawaii attire simply does not suit the man the way it does a surfer dude like Kiptyn… and his “mankini” REALLY did not help matters… neither did his “mantank” or his humidity hair; Ed is suited to Chicago, and there he should stay. But hot weather aesthetics aside, Ed just didn’t have the calm and slightly nerdy sweetness going for him this week that has been his bread and butter so far in the competition. He seemed anxious. I didn’t much like his family (though it was sweet that he flew them in) and I REALLY could have done without the icky massage oil sequence. I don’t know if it was the editing or if he was just having an off week, but I haven’t disliked Ed in a long time and this week he just made me say “ick”.

So why is this annoying? Well, it’s annoying because the week that my favourites get reshuffled to have Reid at the top and Ed slipping down the list is also the week that Moron McSlutty decided to get rid of Reid (because her inability to read people leaves her always needing verbal reinforcement of their affections, something Reid can’t provide) and move Ed into the final 2 (along with Kiptyn, who has been my least favourite of the 3 for a while but I think is possibly the best suited to Moron McSlutty, even though I generally like him and think he can do better).

As Reid departed after a teary goodbye from Jillian (always a sign that she’s made the wrong choice; remember how Jason cried when he let Molly go), he confessed that he really did love her and puts all the blame for his departure on his inability to tell her so. So my guess for the finale (2 weeks from now) is that the “big confession” is Reid making a reappearance and finally telling her he loves her. God I hope that’s not the case, but it’s my best guess at the moment. I think she’ll end up with Ed in the end, Kiptyn will be the next Bachelor and Reid will move on to break down his emotional walls for a girl more deserving.
Next week is the “The Men Tell All” special which is set to include lots of Wes talk, an expectedly vague interview with Jillian and an appearance by last season’s controversial couple Jason and Molly (who are still together… who knew?!).