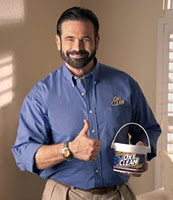 What a Crappy Week: goodbye to another familiar face

After the deaths of the prince of late night (Ed McMahon), the queen of the 70s (Farrah Fawcett) and the king of pop (Michael Jackson) earlier this week, you can now add the king of pitchmen Billy Mays to the tragic list.

The familiar booming voice of Billy Mays has been convincing television viewers to buy products like Oxy Clean and Mighty Putty since 1993. With his smiling bearded face and signature thumbs up, Mays was considered the best salesman around.
He was found dead in his Florida home this morning, June 28 2009.

His documentary series Pitchmen is currently airing on the Discovery Channel at 10pm on Wednesdays.