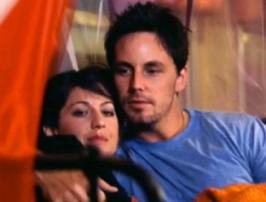 That’s it! I’ve finally had enough with Jillian Harris (or, as E!online has dubbed her, “realitart”).
The girl is absurd. First of all, I haven’t watched a season of The Bachelorette since Trista but are they all really so, how to put this nicely,… tarty? Jillian is as forthcoming with her physical affections as the icky Jason was, though with her I’d argue that it comes from a different place. It seems to me that Jillian is either incredibly full of herself or has no sense of self worth- it’s definitely one of those two extremes. In between comments about how she’s “such a good person”, “incredibly honest” and “so hard working and motivated”, Jillian asks constant questions like “am I your type” and “are you really here for me”? Add that to her inability to distinguish who to put her trust in and her tendency to throw the guys who really care about her out the window and it’s clear that Ms. Harris’ self confidence is definitely out of whack (whether it’s because she thinks she’s too good for the good guys or that she doesn’t deserve them, either way, it’s not healthy).
After this episode, I’ve finally come to recognize something that’s been brewing for many weeks now- I severely dislike this girl. I think she’s selfish yet pretends not to be, I think she’s got bad taste, poor judgement and is, for lack of a better word, a “realitart”.
That said, of the 4 guys she has left, I’m quite fond of two and have a definite TV crush on the other (I’ve decided to pretend as though Wes doesn’t exist, it’ll be better that way).
In tonight’s episode, Jake (who was cut last week) reappeared to valiantly warn Jillian about the girlfriend that everyone knows he who shall not be named has (he even named her, it’s Laurel). And though I appreciate that he was “doing the right thing”, I think perhaps Jake took his hero complex a bit too far this week, coming off a bit cartoonish in the process. And after 5 hometown dates in which Jillian was grilled uncomfortably by Kiptyn’s mom, ate dinner with every female relative Wes has and celebrated Reid’s 30th birthday with his family, the boring Jesse was sent home alongside my beloved Michael (who not only had the best family but confessed that he must have really loved “the girl” in his heartbreaking exit interview). But, TWIST TIME, Ed came back! A favourite of mine who was never given quite enough screen time to fully steal my heart, Ed left a couple weeks ago under threat of losing his job. This week, he turned up on Jillian’s doorstep asking for her to take him back (no mention of what happened with his job). Naturally, she invited him to the rose ceremony to heighten the tension. But then she ultimately gave him the rose; that makes a final 4 of Reid, Kiptyn, Ed and he who shall not be named.
I like Kiptyn, I always have. His family, though a little intense, was sweet and smart and funny and down to earth. They drink fancy wine and covet their lasagna recipe and sing the blues (literally), I love them. And Kiptyn has always had fantastic chemistry with Jillian, though the sound of his voice drives me a little crazy.
I also like Reid. I barely knew who he was until last week but he’s incredibly cute in his glasses, his dynamic with his family is wonderful, he’s delightfully neurotic and he completely won me over when he powwowed with the train employees when left alone during last week’s group date. How sweet is it that he had a coffee with the crew and asked their advice on date attire!
But, of the remaining guys, I’d choose Ed. Sure he left, but it was mighty brave to come back (and by the way, in this economy it’s just plain stupid to leave your job for a hypothetical relationship on a reality show, of course he left!). He’s also the cutest of the lot (though that’s strictly in my opinion), is remarkably smart and has a low key sweetness to him that I find incredibly endearing. I’d pick him, that’s all I’m saying (which means that she probably won’t, because she’s a little nuts).
IN OTHER BACHELORETTE NEWS:
Fan (and My TV) favourite from last season’s The Bachelor (and Dancing with the Stars finalist) Melissa Rycroft is finally engaged (to someone who’s not Jason Mesnick, thank god). Tye Strickland, an old friend of Rycroft who became more than a friend after Mesnick dumped her on national TV, proposed on Friday and she accepted.
In other Rycroft news, Melissa is now a Good Morning America special correspondent for the summer- way to spot a good thing when you see one ABC, that’s 3 shows Ms. Rycroft has lit up with her hundred watt smile.