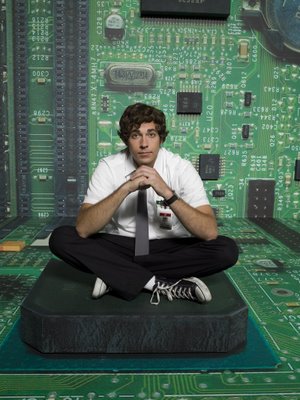 Each of us here at My TV has our specialties. For example, Lauren likes comedy so she mostly sticks to sitcom coverage. I watch pretty much everything from Big Brother to The West Wing, commenting mostly on whatever provokes an emotional reaction from me (whether it be a moving scene between Nicki and Bill Henrikson, a particularly whore-ish episode of The Bachelorette, a laugh-out-loud quip from Better Off Ted’s boss Veronica or a thrilling hip hop by Tabitha & Napoleon D’Umo). And though she dabbles in everything, the majority of Rachael’s posts concern genre shows. She writes essay-long reviews about the metaphorical significance of space aliens, complicated technologically based mythologies and Whedon’s commentaries on the human soul. A big fan of some genre shows like Chuck and Dollhouse, I generally put off watching them (having just finished the latest seasons of both of these tonight) and almost never write about them… tonight I figured out why that is.

*CAUTION SPOILERS AHEAD*I thoroughly enjoyed the ending to both seasons but, when it came to some of the smaller plot details, I had absolutely no idea what was going on. I got Chuck’s unselfish love for Sarah in his willingness to let her go save the world, leaving him behind. I got Sarah’s unselfish love for Chuck in her decision to give it all up and be normal with him. I got Chuck’s growth in finally deciding to be the hero that he is and how very awesome it was that Awesome got to be in on the secret. I got Casey’s battle with his loyalties and his ambition; I got Morgan’s quest for fulfillment; I even got that Chuck now has kung fu skills. But his dad is a super genius CIA agent with his own intersect? Bryce knew? (by the way, where’s Bryce been this whole time?) How do images supply one’s muscles with martial arts ability? Was Bryce duped by the evil guys or just conveniently put in harm’s way? Who are the new evil guys anyway? It’s a simple show but their MacGuffin could use a little clearing up.

But here’s the thing, on Chuck at least it is MacGuffin; it’s unimportant plot that really just serves to get the characters where they need to be to tell the emotional story. On Dollhouse it’s a complete different thing. There is absolutely nothing about Dollhouse that isn’t crucial. Every line, every grimace, every piece of set dressing can easily be a game changing thing in the frustratingly complex world that Whedon’s handing his uberfans this time. I’d say I’m a pretty savvy TV viewer with a complete understanding of the Whedon vernacular but I gotta say, I find it hard to keep up with this show. I spent the entire finale screaming at my TV screen: “SERIOUSLY? NO WAY! OH MY GOD! WHAT?”. So there was a glitch a few years back and Alpha got too many imprints at once and he snapped? Was that before or after he chopped up Amy Acker’s face? What’s the significance of that particular duo of imprints? Is he still glitching or is that just the personalities fighting each other? And if it is, why didn’t Echo glitch the same way? Does the fact that Echo was a hero when uploaded with the dozens of personalities and Alpha was a villain have to do with who they were as people (killer vs. coed?) does it have to do with the souls Ballard is convinced live on? How is it that post-wipe, Echo is conscious of Caroline? So Amy Acker’s character has been living in a permanent state of imprint? (the imprint of an old man nonetheless?), why was she imprinted with hatred for the Dollhouse?Victor can no longer function as an active because he is no longer “his best”? What does it all mean? What deep message does it carry about the fate of humanity? What is Joss Whedon on and is it possible that he’s not human? I simply don’t get it.So what have I learned from my foray into deciphering the twists and turns of genre shows? Just sit back and enjoy… and leave the analysis (and the task of noticing that the door in the background was open when it wasn’t before, which could mean that the salvation of the characters lies with an inside man slowly scratching away at the integrity of the ambiguous big bad) up to Rachael.