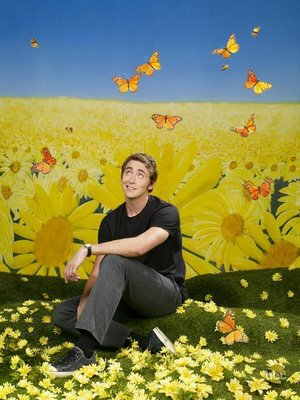 Last night marked the ending of the beloved quirk-ball that was Pushing Daisies. As a series, Pushing Daisies was unique. It stretched the boundaries of television aesthetics with a vibrant colour palette, eccentric costuming, dreamy locales and post-production innovation. Featuring one of TV’s best casts (led by the delicious Lee Pace, Anna Friel, Chi McBride and Kristen Chenoweth), some innovative plotting and plenty of quotable lines, Pushing Daisiesstood out in the television landscape.

Sadly, the product itself did not always live up to the sum of its ingredients. Always enjoyable but not consistently engaging, Pushing Daisies struggled to find its audience. The strike-shortened 2007-2008 TV season provided it with a second chance to impress the next year, as ABC generously renewed multiple fledgling series that had been crippled by shortened seasons. In fall 2008 Pushing Daisies was welcomed back to the schedule with open arms by the few devoted fans it had won last year.

Unfortunately, a lack of promotion and summer re-running made for few new viewers for the second season. After airing 10 episodes of season 2, ABC cancelled the series (along with their 2 of their other smartly scripted shows, Eli Stone and Dirty Sexy Money) and burned off their final 3 episodes in early summer.

Since production had wrapped by the time the producers were notified of the cancellation, the ending of Pushing Daisies is rushed and somewhat unsatisfactory. A standard episode ends with a game changing cliff-hanger. Desperate to give their devoted fans an ending, the producers retooled in post-production, adding a voice over and montage that hastily wraps up the stories and reminds the audience that “the ending is just the beginning”.

While this gesture of closure is appreciated by all of us who remember being left hanging on cliff hangers at the ends of such series as American Dreams, Grosse Point and Freaks & Geeks, it is extremely bittersweet. The complicated stories in Pushing Daisies needed more time to play out, and in the absence of that time, I sort of feel as though leaving their resolution completely up to the imagination would have been in keeping with the fantastical tone of the series more than giving them one sentence conclusions. After all, many series finales deliberately leave the audience hanging, letting them interpret their own ending (The Sopranos being the most famous example but Veronica Mars ending on a similar note).

But hasty finale aside, for 2 short seasons Pushing Daisies was a welcome break from the dramatic doom of most television. It was pleasant and fun and certainly not devoid of depth (for all its sugar, spice and songs). I will surely miss my time with the pie maker.