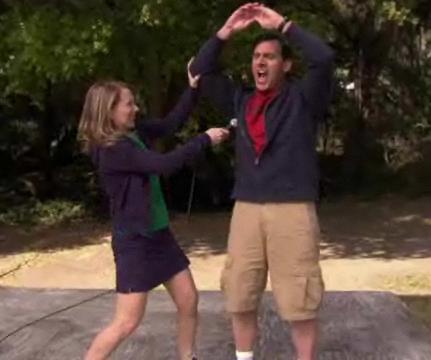 This week’s season finale of The Office was pure, unadulterated joy. From Andy’s crush on Erin, to Dwight and Angela’s mini-reconciliation, to Stanley’s drunken glee, it had happiness and hope for nearly every character. But most importantly, it brought the three most important characters to beautiful places. Michael met up with (the almost mythical at this point) Holly, and I immediately remembered why Amy Ryan was one of the best things to ever happen to this show. She was goofy and adorable and endearing, and more than that, she brings out the best in Michael. Around Holly, Michael is a human being, awkward and stupid and prone to ridiculous gaffes, sure, but capable of nearly astounding grace. His ending monologue about theirs being a “long term” love was at turns heartbreaking and hopeful. Please, please, NBC, whatever you have to do, bring back Holly next season.

And speaking of long term love, Jim and Pam. Pam had a great episode to begin with, getting super competitive in volleyball and deciding to stay at the company picnic despite her and Jim’s desire to just make the rounds and then escape. But the episode capper, where Pam, attempting to find out about her volleyball injury, instead finds out she’s pregnant, was poetry on screen. Kudos, a million times over kudos, to John Krasinski and Jenna Fischer for bringing so much exuberance and joy. Specifically Krasinski, who in a five second phone call to Dwight managed to radiate so much love it was nearly overwhelming. We’ve spent so long with these two characters, watched them go from awkward flirting to blatant longing to the art-school-phase and now they’re one of the most believably happy couples on television (I’ve said it before, but they’re Monica and Chandler where they once seemed like Ross and Rachel, and I argue this makes them all the more epic). This is romantic arcs done right.

All in all, a beautiful capper to an occasionally really sad season.

And check out that moment between Jim and Pam, and the incredibly fine, emmy-worthy acting that accompanied it: