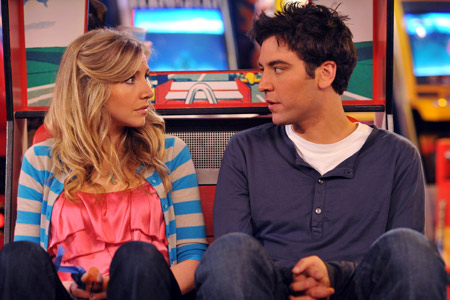 It’s a big week for reveals here in Rachael-TV land. First the Alpha-ocity of this week’s Dollhouse, and now a big reveal on How I Met Your Mother regarding the show’s eponymous mother. Or was it?

The structure of this week’s HIMYM (where Ted tells us the one thousand things leading up to the moment when a female hand reaches under his stolen Yellow umbrella*) was almost exactly like last year’s “The Platinum Rule**” in that nothing really happened, and we got mostly flashbacks and fantasy sequences. And normally I like these episodes, but this week’s seemed especially set-up-without-pay-off-y.

There major thread left hanging after this episode is the end of episode reveal of who the woman under the umbrella is. Ted spends all episode telling his kids how important this moment is, and how many little things had to go into the process of this moment happening. So when the woman reaches over, and it’s none other than (SPOILER ALERT) Stella, it feels kind of – UGH!

I mean, come on. By the end of the Stella-arch, I hated her. Viscerally. She was often one of the worst stereotypes of female flightiness, on top of which, it seemed pretty damn obvious she wasn’t the mother. And I’m fairly certain she still isn’t. For one thing, in the episode “Shelter Island,” Ted had us flash forward to what kids with Stella would have looked like, and they didn’t look anything like the kids in future Ted scenes. For another, it seems like the kids would point out “hey, it must be mom in these scenes, since we have that much older half-sister.” Plus, telling the story of mommy leaving you at the altar? Not a real “aww” kind of a moment. Plus Stella was lame. And didn’t like Star Wars.

So all that means is that we watched a whole episode that started with my heart literally speeding up when Ted grabbed that yellow umbrella all significantly in the beginning with a reveal that we’re going to get to see Stella again. Whoopee. I hope this pays off, and I’m inclined to believe it will. I’ve recently marathoned season one, two and most of three, and am really excited to rewatch the groundwork laid into the mother story, and am hoping that all of it comes to pass. This is a show that intensely believes in fate and destiny, and I hope that all the disparate mother related threads (from the dating service that tried to hook Ted up with the perfect woman, to the woman he bumped in to at the bar on St. Paddy’s Day, straight through to Stella) come together nicely, and that we aren’t subjected to a rehash of Ted/Stella gate ’08.

That being said, there’s another lingering plot thread that I’d like to comment on from this episode. After Robin throws up on air, she jokingly tells Ted and Barney that she’s pregnant (which was a cute little nod to the fact that Colbie Smulders, despite still having annoyingly chiseled facial features, is about ready to pop). Ted immediately proposes, although he wants to still have sex with other women, which was a cute throw away to Ted’s desire to have kids and yet to how far Robin and Ted have come that he doesn’t just want Robin forever. Barney, on the other hand, runs away. I’m fairly certain, because I have faith in the HIMYM showrunners, that this is going to come back. In fact, I pictured him proposing like he did in the background of the episode where Robin was losing her work VISA. If this does come back, it’s exactly why I love this show so much. They’re capable of implanting a seemingly throw away scene in a seemingly throw away joke that in the future will pay off much bigger than we could have imagined (see also: the really old penny in Season Two, the butterfly tatoo in Season Three, the Slap Bet in all the seasons). If it doesn’t pay off, well it was kind of lame. But I think it will pay off, because even the laugh track didn’t find Barney’s running away funny, and therefore I’m inclined to believe this is going to be the catalyst for the Robin/Barneyness I’m expecting from the finale.

So all in all, not my favorite half hour of HIMYM of all time, and mostly just a place holder for the finale, but assuming the team knows what they’re doing, this could all be setting up some pretty fantastic stuff for the finale. Also, all that being said, Marshall’s chart obsession could be one of my favorite jokes of all time, and watching Barney struggle to reach 200 with a supermodel was pretty cool, especially as it served to put a possible cap on his previous efforts to just sleep with everything that will have him. And yes, he should probably get tested.

*From last season’s episode “No Tomorrow” where a St. Patrick’s Day inspired Ted lived a whole night according to the theory that when you do bad things, good things happen, and wakes up embarrassed and hung over and phoneless, only to trek over to the bar he visited the night before (where we learn through narration the mother was also attending) to find said phone and finding instead a lonely, lost, yellow umbrella, which the narration also tells us plays a huge role in the meeting the mother aspect of this story.

** In almost the exact same structure, we spend almost the entire episode in the build up to Ted going on his first date to Stella, while Marshall, Lily, Robin and Barney narrate flashbacks. It’s also a structure used in “Lucky Penny,” which was all about the events that led up to Ted missing an important flight to Chicago to interview for a new job. Both of these episodes were sort of place holders in between major plot developments, although of the three, I think “Lucky Penny” is probably my favorite, because it referenced a lot of other storylines as it tied it all together.