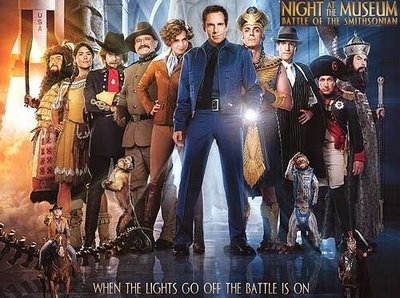 “For The Fun of It” -Amelia Earhart

I’m just going to go ahead right now and declare Night at the Museum 2: Battle of the Smithsonian (along with Star Trek) my favourite of the year so far.
Full of fun, life, a stellar cast, good effects and flat-out good writing, both movies soared beyond my wildest expectations.
But Night at the Museum, which I just saw this afternoon, was the big surprise. Not usually a huge fan of cutesy kid movies (other than the ones from when I was kid of course, which I still love), I didn’t even see the first one. But the Smithsonian holds an appeal that the museum of natural history just doesn’t have, the reviews were coming in full of praise and I’ll go see Bill Hader in almost anything. So I went. And it was AWESOME.
Not only did the film cement my affection for Bill Hader and Ben Stiller, remind me that Hank Azaria is one of the funniest men in the world and solidify Amy Adams’ role on my favourite actress list, it provided me with a parade of my favourite television stars and pop culture artifacts to giggle at: “Whoever this Archie Bunker was, he had an extraordinarily comfortable throne”.
Clever, self-referential, and diverse in comic tone, Night at the Museum was all sorts of things I didn’t think it possibly could be. It even featured Abe Lincoln commenting on the optimistically promising current state of the union, just in case you were searching for some sort of deep social commentary buried inside an incredibly amusing fantastical romp.
From Amy Adam’s feisty and quirky performance to Hank Azaria’s hilarious accent, to the obligatory kid movie heartwarming moments, Night at the Museum 2: Battle of the Smithsonian is totally worth seeing, just “for the fun of it”, as Amelia would say.
Now here’s where I justify writing about a movie on a TV blog:
– Shawn Levy (director), a Quebec native, directed many an episode of brilliant kids TV like Animorphs, Alex Mack and Lassie.
-Hank Azaria (head villain Kahmunrah and the voices of The Thinker and Abe Lincoln) is the man behind almost every voice in Springfield (The Simpsons).
– the best person in the film, Amy Adams (Amelia Earhart) was a guest star on The Office in season 2, playing Jim’s girlfriend.
-speaking of The Office, Kelly (Mindy Kaling) and Daryl (Craig Robinson) both showed up as a museum docent and an Airman come to life, respectively. And Ricky Gervais, the creator and star of the original BBC Office was in it too!
– Toofer (Keith Powell) showed up, representing 30 Rock as Craig Robinson’s co-pilot.
– Jay Baruchel, former star of Popular Machanics for Kids, Are You Afraid of the Dark and Undeclared, played a sailor come to life in a painting/future technology genius.
– Oscar the Grouch was played by the actual voice of Oscar the Grouch (and Big Bird), Caroll Spinney.
– Jon Bernthal from the short-lived but beloved The Class (Duncan) played Al Capone, completely in black and white (very cool).
– and last, but not least, my favourite SNL player Bill Hader put on a good show as the absurd yet strangely heroic (or at least well-intentioned) General Custer.
FAVOURITE QUOTES:
Einstein Bobblehead: [to monkeys Dexter and Able who are attacking Al Capone] “You slap, you kick, you slap, you kick, you slap, you kick, team work, wonderbar!”

Security Guard (Jonah Hill): “It’s the United States of “Don’t Touch That Thing Right in Front of You.”
Kahmunrah: [to Darth Vader] “Is that you breathing? Because I can’t hear myself think! There’s too much going on here; you’re asthmatic, you’re a robot. And why the cape? Are we going to the opera? I don’t think so.”
The Thinker: “Hey baby, check out the gun show goin’ on over here. BOOM BOOM! Firepower!”
Tukegee Airman: [thanking Amelia Earhart] “A lot of people didn’t think we could fly, either. Thanks for clearing the runway.”