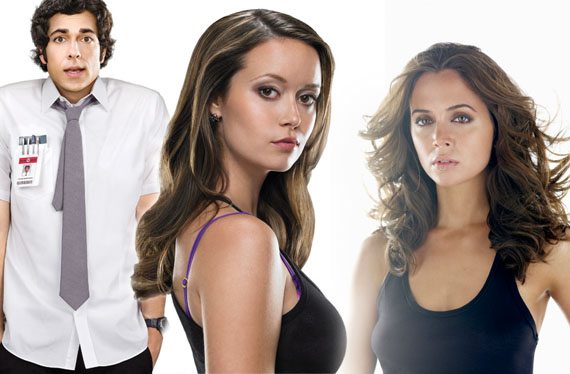 I am a serious fan of genre fiction. I say this to distinguish myself from people who like Lost despite the science fiction or enjoy Buffy while despising horror. It’s not a value judgment; it’s a question of taste. For me, stories that come from a deep internal mythology speak more heartily and more truly to me than ones set in “reality” necessarily do. I like shows that exist within their own world. There are exceptions, but it’s not a coincidence that whenever I attempt to compile my top five list of favorite television shows*, there’s very few straight dramas or even straight comedies on it. I also believe that most writers are at the top of their game when they’re having fun, and that most of the geeky/wonderful show runners that I love feel at home within the world of genre fiction (Whedon, Abrams, Moore, even Josh Schwartz I think is at his nerdy best on Chuck, and what is Gossip Girl if not a piece of genre melodrama?). My reading tastes have always veered away from straight drama and into the home of genre. Where other people were inclined to value something less thanks to the preponderance of elves and cyborgs within it, I believe profundity is best when served with a side of wizardry. It’s been this way since childhood, when I forwent The Babysitter’s Club for Animorphs, Rainbow Brite for X-Men, and Barbies for Star Trek action figures. Sure, this could all be a reason for why I’m a huge nerd, but that’s not the issue at play here.

All this musing has a point, I swear. Entertainment Weekly, in the Popwatch column of the site, recently asking the question “The Great Sci-Fi Divide: Why don’t we want science fiction on tv?” In the article, Marc Bernadin rightfully points out the strange paradox in popular culture today where Star Trek and Terminator: Salvation seem poised to win the summer box office battle while Dollhouse and Terminator: The Sarah Connor Chronicles are on the brink of cancellation. He ultimately finds no conclusion to this paradox, but I’d offer up some food for thought: Sci-fi shows take a lot of freaking work to understand. We’re not talking about easy science fiction here (neither show has cheesy aliens in sexy revealing outfits); we’re talking about deeply metaphorical undertakings that want to talk about the meaning of existence. Sure, there’s lots of explosions and sexy robot/doll chicks, but these shows require a lot more attention than So You Think You Can Dance.

It’s more than just that though. Chuck, for example, doesn’t really require much out of me. Don’t get me wrong, I love it. I think it’s a great example of cast charisma and writing savvy along with a healthy dose of fun. But the computer in Chuck’s head isn’t an overarching metaphor for humanity, and his relationship with Sarah doesn’t carry mythic implications. It’s just cool. On top of that, Lost is just as difficult a show to take on as T:TSCC or Dollhouse, with just as complicated a back story. I think it comes down to nothing more or less therefore than networks being terrified of genre work and of throwing their whole weight behind it, unless they can find a way to hide the fact that it’s sci-fi. The geeky awesomeness of the Dharma Initiative and the increasingly complex Lost mythology snuck up on us, so ABC threw the full force of advertising and programming behind it. FOX has always seemed kind of scared of its shows.

I’m not sure, really, what to make of the whole divide and it might be one of those pop culture questions that takes specific examples and turns them into generalizations without any real sense of purpose. For example, all three of the shows mentioned (Chuck, Dollhouse, and T:TSCC) had slow starts that were pretty much critical failures. I can’t tell you the number of people who’ve claimed to have seen the first few episodes of any of these three shows and then given up on it (I’m even one of them as far as T:TSCCis concerned). Maybe this can all be written to bad pilots/network interference/fate?

*This list is an ever evolving concept, as likely to change daily as my answer to the “What’s Your Favorite Movie?” question. Mostly, it involves Buffy/Angel (as one entity) and Star Trek: Deep Space Nine, but the other three spots are open to interpretation depending on the day. Am I thinking about my relationship with my mother? Then probably Gilmore Girls. Am I more into being a badass and my relationship with my father? I’m all about Veronica Mars. Am I feeling nostalgic for childhood? Freaks and Geeks. And don’t even get me started on trying to figure out where half hour comedies fit into the mix.