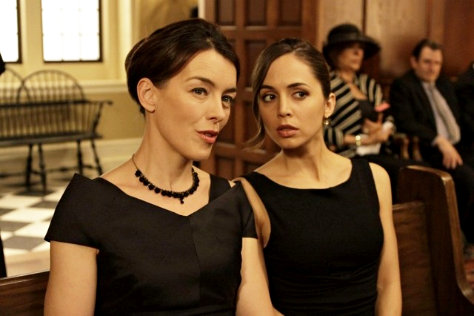 This week’s episode of Dollhouse, “Haunted,” went back to the beginning formula, with a self-contained monster of the week that felt a little as though it were holding off for bigger episodes. But unlike the first couple of episodes, this week’s monster of the week was actually pretty damn thought provoking.

Margaret, a very rich woman who was friends with Adele, prepares for her consciousness to be downloaded into Echo after her murder. Margaret, in the guise of Julia, then spends the entire episode trying to right the wrongs of her existence and uncover her own murderer. The actual mystery wasn’t that exciting (although I have to say I was shocked it wasn’t Uncle Bill, played by Whedon regular Gregg Henry, who did the murderous deed). In fact, it occasionally dragged, and the Margaret implant (which started off very promising with her interactions with Adele) quickly got boring. But the ideas that it brought up (as made obvious by Boyd) about immortal life and the scary implications of what the Dollhouse represents (as hinted at since “Man on the Street”). It was a painful thought process: if the dollhouse technology can allow all of your memories to be implanted into a new body, does that make the new body you? In the absence of a soul, in a purely materialist viewpoint, then it would seem that yes. And does the fact that at the end of the episode Margaret slipped back into the ether invalidate the experiences she had? Does death invalidate life? All this is only made more confusing when you consider that this mission is the first on which we haven’t seen Echo glitch (I, for the record, kind of missed the developing Echo personality, as for the first episode ever, we didn’t see even a little bit of her).

It’s pretentious, I know, but it was a pretentious/thought provoking episode. What it lacked in plot development it made up for in thematic development.

As for the B stories, they were pretty slight. Ballard dealt with the aftermath of last week’s revelation that Mellie’s a doll and we saw him go to new darks. After trying to find a way to keep her off his scent, he finally gave into the rage he was feeling at everything associated with the dollhouse. In one Whedon’s more disturbing scenes (right up there with Wesley telling Lilah to keep the glasses on), all of that rage and frustration and pain got channelled into (hot) hate sex.

Topher, meanwhile, downloaded a buddy in the form of Sierra. I actually really liked this storyline, as it allowed us to see a very innocent side of Topher, although I was hoping for a slightly bigger payoff (maybe, in the vein of haunted, that he had designed his dead brother/sister/childhood-friend?). It also highlighted how awesome that actress who plays Sierra is, and how much she disappears into each week’s imprint.

With two more episodes left to the season (and let’s be honest, probably the series), it’s hard not to get a bit annoyed with episodes that don’t deal with alpha, the overall workings of the dollhouse, or Ballard’s investigation in a substantial way, but I think when I’m pouring over my Dollhouse DVDs in a post-cancellation coma, I’ll find new life in this thematically rich episode.