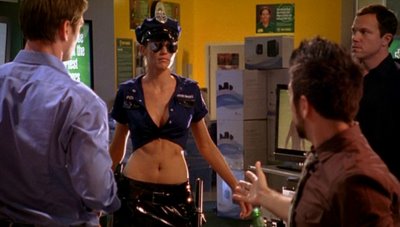 Chuck Vs. The Broken Heart, Vs. The Dream Job, Vs. The First Kill

Man, I picked a fine time to go on a mini-Chuck hiatus. The past three episodes have been the best of the series’ entire run. They’ve been game-changing awesomeness with more than enough goofy character stuff to satisfy all types of fans.

More than that, they really concentrated on Chuck and his tenuous relationship with the FBI. The first episode focused on the way that Chuck’s feelings about Sarah has affected their working relationship (and it featured a spy-tastic Number Six, aka Tricia Helfer). The second focused on his tortured relationship with his father. And the third- well with the return of Jill, the late in the game twisty shenanigans, and the cementing of Sarah and Chuck’s relationship – it was like an exploding cake of awesomeness. Plus, we got to see each of the three main characters arc through the episodes. For the first time, Casey takes a stand and begins to accept the way that both Sarah and Chuck have matured and advanced while on the job (I actually got a little tear in my eye listening to the erst-while Jayne Cobb defending Sarah to the super hot new agent, with whom he had been sharing a gun-cleaning-as-metaphor-for-sex montage seconds earlier). And Sarah- well from episode one of this Rachael-designated three-parter, she was beginning to realize just how far she would go for Chuck, and just how far she probably would have to go.

On top of the character stuff, all three episodes featured some great casting (Chevy Chase?! Scott Bakula- be still my geeky heart) and great fight sequences (in particular, in “Chuck Vs. The First Kill,” the shootout set to “We’re Not Gonna Take It” could be the best gun-tastic fight sequence I’ve ever seen on TV). Plus the plot twists (which I won’t spoil here, because one of the pluses to loving a show that not everyone knows about is that you don’t, for example, read Away Messages that say things like “Charlie died?!” or “Tigh is a Cylon?!” right after the episodes air) are fantastic and true to both the show and the characters. I am filled with giddy glee to get to the next episode, a painful five days away.

This show, like my other favorite hour long (Dollhouse), is probably going to be canceled at the end of the season. And that’s a damn shame. Like Dollhouse (although the two shows couldn’t be any more different in themes), Chuck has gotten better with every episode its gotten to produce, and I have true faith that the show runners behind the scene get what makes their characters so freaking fantastic. Here’s hoping NBC gets that too.