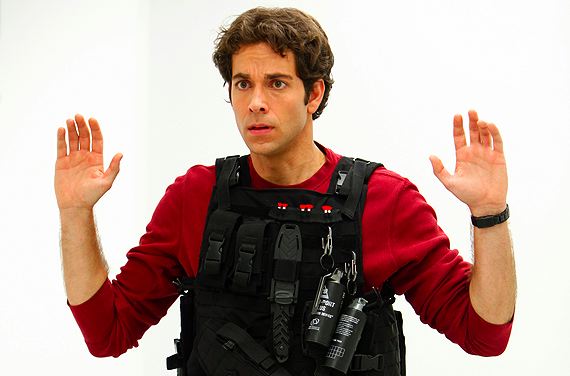 Chuck Versus The Rings

After four straight episodes of unadulterated awesomeness, the Chuck (hopefully) season finale found itself with a heaping helping of high expectations and lingering plot threads needing to be tied up. So how’d it fair?

Well… that’s a complicated question. The first half of the episode featured an Intersect-less Chuck attempting to get through Ellie’s wedding, which, as we all know, was never going to go smoothly. Roark (Chevy Chase) shows up and threatens Ellie’s life unless Chuck gets him the Intersect cube, and all of a sudden Bryce Larkin’s back trying to sweep Sarah off her feet. Things go haywire, and the centerpieces get destroyed, and Lester (Jeff and Lester’s band) ends up playing “Domo Arigato” and setting off the fire alarm in the wedding hall. But never fear, Casey’s here and Roark is defeated. Chuck saves Ellie’s life, but not before destroying her wedding, “the most important day of [her] life.” So Chuck uses his government severance check to buy her the wedding she really wanted.

I’ll admit, I teared up a little watching Chuck and Scott Bakula give Ellie away (even if I think the whole process of “giving away” a grown woman is misogynistic, antiquated, and stupid). I love the Chuck-brother-love for Ellie, even when I think Ellie’s an extremely underdeveloped character. Add to that the scene between Awesome and Chuck, with Awesome’s silent acknowledgment of how much Chuck went through to give Ellie the perfect wedding, was a beauty. It was classic Chuck, from the cheesy/awesome shoot out to the happy ending.

But we were only thirty five minutes through the episode. Chuck still has his future to deal with. The government offers him a job working on the intersect, and he refuses. This sort of seems like a stupid decision, but I’m not Chuck. I’d rather be a spy than a regular Joe. Meanwhile, it seems Sarah’s going to take off with Bryce, but let’s be honest, we all sort of know that’s not going to happen. She chooses Chuck over Bryce and, more importantly, over her job. Oh, also it turns out Chuck’s dad has intersect in his head that we’ve never heard about before that gives him crucial information just as Bryce would otherwise be murdered and the brand spanking new intersect destroyed. Hmm…

This middle portion, after the wedding but before they all end up at headquarters, is the MEH portion of the episode. It doesn’t really tell us anything we don’t know, and it relies too much on silly plot turns (Chuck’s Dad just happening to have the intersect, Bryce showing up at the wedding just to stare forlornly at Sarah).

Once they get to the Intersect, it’s back to old school awesomeness, with shoot outs and bad guys and all the sort of cheesy action goodness Chuck has been delivering so hardcore all season. Then Chuck falls into the Intersect Room to find a dying Bryce. Bryce tells him to destroy the Intersect computer before the baddies can get it. Chuck does a non-Intersect flashback to all the times over the years that people have told him that he needs to step up and be a spy, and to multiple instances of Sarah’s unwavering faith in him. He sees the Active Intersect button, and he pushes it. Pictures abound.

Baddies break in after Chuck’s destroyed the Intersect, and they’ve captured Sarah and Casey. They threaten to kill all of them. Chuck flashes. They notice (this is the first time in Chuck history that a bad guy has noticed that weird eye thingy Zachary Levi does so well) and decide to kill Chuck first (which seems a little stupid, given that he contains all the information in the universe inside him and is incredibly susceptible to torture, but what the hell. That’s why I’ m not a henchman on a cheesy TV show). Just when it seems like our heroes are doomed, faster than you can say, “NEO YOU ARE THE ONE!” Chuck starts ninja’ing out on the bad guys.

It’s a cute moment of geeky goodness, made even more explicit by the Matrix quote Chuck throws at us to end the episode, “Guys. I know Kung Fu.”

This episode has completely rebooted both Chuck and Chuck, promising a different, although similar, new season, with an all new, bigger baddie and a whole cadre of new powers for Chuck to discover with this new intersect. The possibilities seem endless.

It also ties things up semi-neatly if the show gets canceled. I’ll still be pissed, don’t get me wrong, but there’s something comforting about picturing the newly formed trio of bad ass spy folks continuing to fight the forces of anti-patriotic evil with a newly super powered Chuck.

If the show does come back, though, like I hope it will, I hope the writers don’t let Chuck’s super powers get in the way of Chuck being Chuck. One of the things I’ve always loved baout the show is the way Chuck is always getting out of things without having to use brawn, sometimes BECAUSE of his awkward geeky loveliness rather than in spite of it. This is the heart of the show (it’s in a lot of the ways the heart of all Josh Schwartz shows, but that’s a topic for another post) and I love this show’s heart.

I hope I get a chance to see where the characters going to go, to see Chuck and Sarah finally get to hook up without Morgan stealing his prophylactics, and to find out if Morgan ever does become a famous hibachi chef in Hawaii.