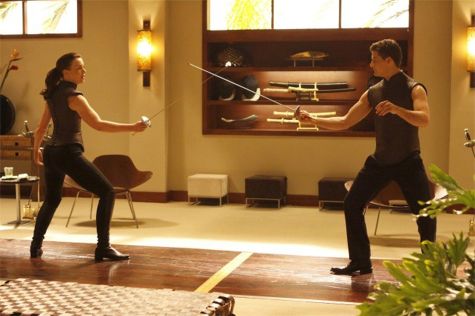 A Spy In The House of Love

Normally, I don’t read any other reviews before I start reviewing an episode of Dollhouse. When I go deep into metaphor and character analysis, I want the ideas to be my own. Unfortunately, my tired brain brought me to the AVClub.com’s excellent review, and in my weakened state I read that before I could formulate my thoughts into sentences. So for the real, in depth, metaphorical, thematic brilliance that was tonight’s episode, check out “A Spy in the House of Love”

On my end, let me just say that I am all sorts of happy with this week’s episode. Dollhouse is unequivocally my favorite show on TV right now, and will continue to be right up until it’s canceled. Which may be soon, if the recent decision by FOX not to air the last episode of the season (which, admittedly, is actually the start of a whole different storyline) is any indication. Which it probably is. And that’s a shame. The show just keeps getting better. I wish it were on a better night, or a better network, or that FOX hadn’t messed with the first five episode, or if it was on basic cable (like SciFi where I think a show like this could really thrive). But it’s not, so in the meanwhile, I’m just going to beg everyone to give it a first, second and third chance, and write angry emails to FOX begging them to bring it back.

* I love the double edged sword that is Ballard and Mellie’s relationship now. Ballard has no choice but to continue with their relationship, as any disruption of it might cause Mellie to kill him, but he’s going to find it repulsive. And any part of him that doesn’t find it repulsive, that still finds comfort in the presence of Mellie, is a part of him that forces him to identify with the Johns who use the dolls for their own sick ends.

* The Dewitt reveal was brilliant.

* Dominic may have been the “mole” in this episode, but he definitely WASN’T the mole changing the imprints, which means that there’s still another mole in the Dollhouse.

* I love the developing Echo character, especially as they start to put ninja and investigatory skills in her. It gives me hope that there’s life in self-realization, but nervous that we’re eventually going to have to reset to Caroline, who’s way more boring.

* Line of the week, courtesy of Boyd explaining the Dollhouse, “We’re pimps and killers, but in a philanthropic way.”