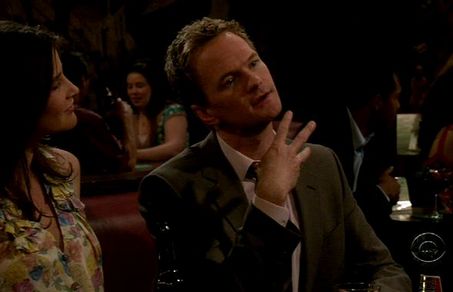 A Beginners Course in How I Met Your Mother

The first five minutes of this week’s HIMYM were like a perfect illustration of the strengths of the four characters who participated in it. Marshall was a kind of lovable doofus, Ted was an incurable romantic, Robin was witty but awkward, and Barney walked the painful tight rope between toolishness and sincerity. It was there in even the littlest gestures, and as well as being a refresher course in why I love the chemistry so much on this show, it also showed how much they’d all grown since their first encounters. Robin and Ted’s relaxed friendship. Marshall and Barney’s growing closeness (which, as we’ll discuss later, was actually a major theme of this episode), and most importantly Robin and Barney. These five minutes should be the reason Neil Patrick Harris gets an emmy this year (finally!). It’s not the big scenes, although he’s great in those too, but the littlest moments when he brings depth to Barney. This scene was a great argument for how these two characters really are starting to seem to belong together. Just look at the way Barney looks to Robin after every joke, as though to gauge how it’s affecting her, or the sincere way that Robin takes joy in Barney’s presence. The cold open for this episode, although not as wacky or plot inducing as some, was probably one of the all time best. On top of that, Barney’s explanation of how the eponymous Three Day Rule actually originated in Jesus’s ressurrection was probably one of the most brilliantly fantastic monologues in HIMYM history.

The rest of the episode didn’t have a single significant development as far as The Mother search goes, or as far as Barney and Robin goes, or even any major thematic jumps, and it hinged on “the three day rule,” a premise that seemed dated when it was used in Swingers** ten years ago. But, well, it was just a goofy exercise in what being friends is like. It followed Barney and Marshall as they took a practical joke too far with Ted, and ended up pretending to be Holli, the girl Ted wants to date. Their text message exchanges are at turns sweet, disturbing and almost pornographic as they attempt to help Ted get all his crazy out before he goes on a date with a real girl. It was one of the episodes that depended upon the friends doing stupid things but coming from a place of love (and let’s be honest, a little enjoyment at seeing their best friend befuddled).

Within this storyline, How I Met Your Mother had to play a dangerous balancing game. If this review were an episode of HIMYM, I’d call it “The Homophobia Line.” Every show that plays with gay themes with straight characters, that draws laughs from snuggles and baths drawn between two supposedly heterosexual, usually male, characters, falls on one or the other side of the homophobia line, and the perception of where said episode lands is normally in the eye of beholder. In my opinion, HIMYM is far too full of love and goodwill (plus, let’s be honest, Barney and Marshall probably would sleep with Ted for the enjoyment of our robot overlords) to fall onto the bad side of it. It doesn’t hurt, though, that NPH is one of the most well known openly gay actors to avoid falling into being typecast. Nor does it hurt that I just really like the image of Neil Patrick Harris and Jason Segel snuggling under a blanket and staring up at the stars.

I like the throw away episodes of this show a lot. They allow you to laugh without having that tempered by deeper considerations and sometimes they make a nice respite between heavier episodes. We’ve been promised some movement on the mother front and the Robin/Barney front by season’s end, so I’m willing to sit back and enjoy the awkward glee of Barney, Marshall, Ted and an incredibly pregnant Robin*.

On a side note, did anyone else have major Friends flashbacks when Robin revealed Barney and Marshall’s plot to Ted, causing him to want to start messing with their heads? “The Messers become the Messees!” indeed.

*No Lily this week (one of two episodes I believe), and Robin looks about ready to burst, but I got to see Colbie Smulders carries baby weight better than nearly any other woman on earth. As though we needed another reason to envy her baby the genes she’s getting.

** So HIMYM hinged on a Swingers device, and Big Bang Theory this week flat out quoted Swingers. Do Jon Favreau and Vince Vaughn rule the world? I think so.