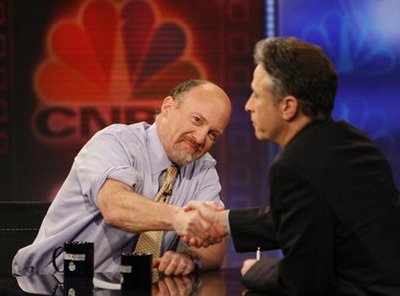 Welcome to Brawl Street: Get Ready to Buy Low and Sell DIE!

I don’t need a very special episode of The Daily Show to tune in, but every once in a while it’s kind of fun, even if it always means that the next day all the bloggers will talk about how disappointing it was (see also: his interviews with Kerry, Clintons Bill and Hillary). But trust me, the blogs will be crazy talking about this tomorrow, but the Cramer/Stewart match up did not disappoint.

This week’s very special Daily Show features Jim Cramer, host of CNBC’s Mad Money. Since last week, when Stewart just flat out tore apart the whole damn network of CNBC, taking a huge chunk of the show to point out all the ways that CNBC steered the American Public wrong in the lead up to the major crashes in the market back in the fall (specifically, it was in response to Rick Santelli, the on-air editor, referring to all the people loosing their houses because of the recession “losers”), there’s been a semi-feud brewing between the two basic cable TV hosts. Cramer objected to the way that Stewart used clips of him, claiming Stewart was misrepresenting his intentions by funny editing. Stewart responded by showing more of the clip, and then even more clips of Kramer giving more of the same bad advice (specifically, advising viewers to buy Bear Stearns stock just before it fell). It’s escalated, needless to say, especially when you consider that the Network News Stations decided to babble on about it, calling it a “war of words” and wasting time they should be using to cover, oh I don’t know, the War in Iraq we’ve all seemed to forget about or the skyrocketing jobless rates. But I digress-

Here are my live blog type thoughts (although they weren’t done anything even close to live, since I watched this on DVR):

I know this makes me the worst of liberal cliches but I don’t care: Why the hell is JON STEWART doing some of the only great interviews on television right now? Why is it that Jon Stewart is willing to make a half an hour of time truly freaking awkward to get at the truth, but most of our most famous reporters are not? This was probably the awkwardest interview, but it was by no means the only one. Add to that the truly sober analysis Stewart provides in between fart jokes and funny faces, and as much as Fox News may want to mock it, we’ve truly got one of the most important shows on television. Oh well, get over it. If the cable news channels want to stop being outdone by a comedian, they should step it the hell up.

I’m going to end with a truly beautiful peice of television commentary from EW’s Ken Tucker:

The audience kept interrupting with applause and cheers, and for once it didn’t come across as a matter of hey-our-guy-just-pounded-a-jerk. It sounded like a small explosion of relief that finally, someone on TV was making sense about what has happened to money in America, and it wasn’t Jim Cramer.

Check out HULU or thedailyshow.com for last night’s episode and for the previous shows (the “feud” started Wednesday, March 4th, 2009). I was going to embed them, but let’s be honest, this post was crazy long as is and I can’t figure out how to make blogger allow me to add cuts to my text.