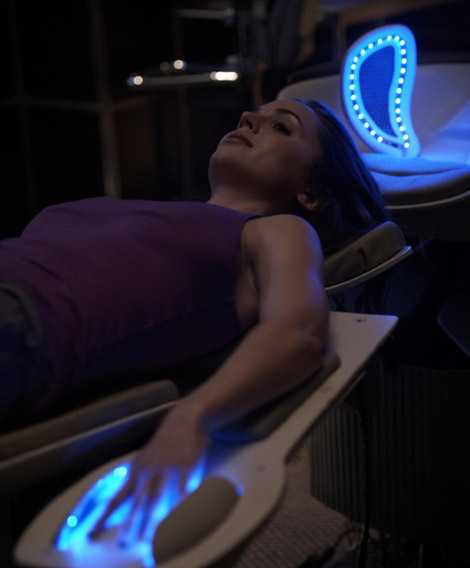 They’re Not Just Experimenting with Animals

Dollhouse this week was a much goofier affair than the week before’s revelation-o-rama. It was back to story of the week mode, with Sierra and Victor being sent to a college to investigate an outbreak of craziness thanks to a drug developed by the enigmatically evil Rossum corporation. Said drug infected everyone in our cast, making them goofy and ridiculous for most of the episode. This manifested itself in a fun little ironic twist for the first half of the episode, where all the Handlers and Dollhouse operatives were infected and spewing stoned-style ramblings while the Dolls (Victor and Sierra) were calm, cool, and collected. This was especially fun since for the past two episodes we’ve only seen the two of them in semi-retarded doll state. Boyd, Dewitt, Topher and Dominic (and their respective actors) all got to truly let loose, letting the goofy flow freely as they got stumbled about, drug-addled.

You’ll notice I haven’t once mentioned Echo. For all that the ostensibly B-story was goofy, fun, monster-of-the-week goodness, the Echo story was all revelations and clunky exposition. The problems with the Echo story started with this week’s imprint: she was back with the guy from the pilot, although this time instead of a badass, she was a pretty blank girly-girl with anime-clothing. Since this was the first week we’ve really gotten to see Echo outside of her job of the week, this meant that we spent a lot of this episode (an episode in which we were supposed to connect emotionally with the character) with the tabula–rasa esque Alice, who was ridiculously dressed, yes, and a big old blank of good ole fashion morals to boot.

The Caroline revelations played equally blankly. To put it briefly, the revelation of her character was disappointing. I would prefer if Caroline were a flawed woman who fell into a situation desperate enough to be picked on by the Dollhouse (more like what happened to the new guy introduced in this episode, who at the end of the episode Dewitt began courting to make a new doll thanks to his weakened position). Instead, she was a pretty generic animal rights chick who just really loved her boyfriend (who was, in his turn, shot during the attempt to unearth the bad dealings of the Rossum group). I feel like blank characters like Carolina and this week’s imprint aren’t Dushku’s strong suit. I still strongly maintain the chick is capable of great heights in acting, but I think that she needs a complicated, conflicted, interesting character to make it happen, so it’s disappointing to have the writers hand her ones that are so boring.

The Rossum group was the other big revelation of this episode. They’re a shady organization, experimenting on animals and humans with equal abandon, that is deeply, deeply connected to the Dollhouse (possibly founders of?). I’m sure we’ll get more about this in the future, but I hope it’s handled better than in this episode with the valueless moral judgments like “This is Rossum. They don’t care about souls, human or animal.”

All that really happened with Ballard this episode is that he and Mellie broke up, and I’m a little confused by it. Did the Dollhouse decide she was no longer necessary (and why the hell would they), or was it just that within the imprint they could no longer make Mellie put herself through that? That would introduce an interesting limitation to the whole concept of Actives. Since they’re designed as real people, are there limitations to what you can make a given imprint do?

Somehow, in review, it seems like I didn’t like this episode. I did. A lot. It brought the funny in a way that standalone, place-holder type episodes should (Whedon himself has said that 6 and 8 are the big episodes, and judging by next week’s insanely awesome looking preview, I can see why). Not every episode of a show has to be explosions and game changers. There’s something to be said for being able to understand aftermath and the status quo*. And all the non-Echo centered stuff in this episode was solid, stand-alone episode gold. I just hope the writers take more control of the character of Caroline and make her into more of a character that I can root for.

Topher: What are you doing besides being…
Dewitt: What? Saracastic? Unfeeling? British?

Dewitt: You must admit I am very British. I don’t say hard Rs.

Boyd: Well, I did NOT take control of that situation.

Topher has a drawer of inappropriate starches?

Dominic: I tried to burn you to death. Who does that?

*Because the status is not quo. And I just have to… rule it.