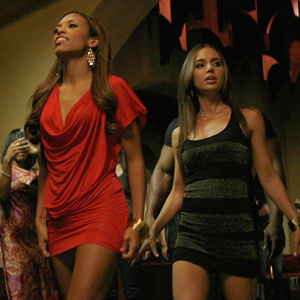 General consensus on this week’s Dollhouse is that it’s a subpar offering sandwiched in between the greatly improved second episode and the (hopefully) awesome fourth episode. And it is, subpar, I mean, thanks to the far-too-on-the-nose A-story involving Echo playing backup singer* to a Rihanna-esque superstar with a poorly-formed death wish, who waxes poetic about how Echo may not have “come from the factory” but she sure did and God doesn’t she just wish she could have a real personality. And that song about freedom played annoyingly over the ending of the show made me felt like i was watching a particularly stupid episode of Grey’s Anatomy. But this week was also indicative of fun awesomeness to come. For the first time, I feel like the writers are having more fun with the idea of The Dollhouse (and I’m hoping that soon they’ll forget the whole painfully-clunky exposition that’s been bogging down every episode thus far), and the Ballard (Tahmoh Penikett) storyline is really starting to take off with this week’s revelation that the informant he’s been working with (the weasley, heavily-accented informant who says great things like “I wish there was a dollhouse. I want to come back as Doris frickin’ Day”) is actually an Active. On top of that, the supporting characters (besides Boyd, whose been pretty sympathetic from day one) are starting to get more interesting, if not quite loveable yet. The introduction of the Attic, and by making the Security Guard in a Suit into an embodied antagonist the show is elevating the drama to a high level. And finally, that final nod between Echo and Sierra, which proved that not only is Echo starting to maintian memories despite the mind wipes, but is in fact so aware of this and so aware of the situation into which she is being placed that she’s able to use that knowledge to thrive in her environment. We’re starting to finally get Echo the character, not just Echo the, well, echo of a character.

In other words, although this week’s episode was pretty not good (not awful, by any stretch of the imagination, but definitely not good), I’m looking forward to next week’s more than I have been thus far.

*Who knew Dushku had those pipes, eh?