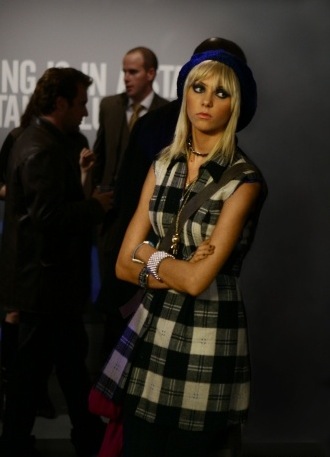 Don’t get me wrong, this week’s episode of Gossip Girl still hadn’t completely recovered from the whole Rachel/Secret Sex Club debacle, but it was the first episode in ages that I felt that old pre-break Gossip Girl flair. Oddly enough, though, I managed to like this episode a whole bunch despite being pretty mad at the main characters for most of it.

In this week’s episode “Remains of the J,” Serena attempted to throw a Sweet Sixteen Party for Jenny. Meanwhile, the Blair, Chuck, Nate and Vanessa love-quadrangle took center stage, with Nate finally biting the metaphorical bullet and breaking up with Vanessa, just as Vanessa and Chuck start getting all scheme-y (before getting steamy). They’re both pretty much A-stories, so we’ll just call them Story 1 (Serena, Jenny) and Story 2 (B, C, N and V). There was also a third story about The Humphreys lacking the funds to send Dan to Yale (Come on. Have they never heard of Sallie Mae? As someone who went to a super-expensive four year school on a middle class salary, I’m offended) that was pretty much just treading ground for an eventual, season’s end, college shake up.

Story 2 was the old school Gossip Girl goodness, in more ways than one. Nate and Blair have surprisingly good chemistry (although obviously nowhere near the fireworks of Blair and Chuck), much better chemistry in fact than Nate has with anyone else, so if anyone has to be smooching Blair when it’s not Chuck, I’m glad it’s Nate. That being said, Nate was pretty much an idiot all episode. It seems like the writer’s use Nate’s indecisiveness as a crutch; whenever they want to draw out a story line, they just ask Chase Crawford to stare blankly at the camera with his man bangs. And he was totally lying to himself if he truly thought ending things with Vanessa had nothing to do with Blair. Nate is the classic (and classically Kelly-described) dichotomy of Nice vs. Good. Nate is very, very nice. He doesn’t want to hurt anyone’s feelings. But this episode clearly demonstrated how not good he is. Which leaves us with Blair, who seemed kind of declawed in this episode. Watching her reveal her deeply hurt heart over Chuck may have been a nice reminder of why she just can’t play kiss and makeup with him yet, but it’s getting repetive. And she seemed almost pathetic chasing after Nate and Normalcy (this was most exemplified when she melodramatically whined at Nate, “Only my boyfriend gets to touch my hair.”). No one wants you normal, B. It’s what makes you fantastic.

Meanwhile, Vanessa got to be interesting for the first time in ages. Freed from the going nowhere boringness of coupledom with Nate, she finally got to give in to her bad side. It’s not a coincidence that the “bad” characters on this show are everyone’s favorites — they’re clearly the writers’ favorites. With this episode, Vanessa got to indulge in a little bad, and not the stupid kind of bad that leads to letter stealing or Blair fighting, but the good kind that manifests in Chuck kissing and dress removing. Watching her and Chuck team up and scheme against Nate and Blair was perfection.

Story 1, meanwhile, was a much more frustrating affair. Although you wouldn’t know it from the previous couple of episodes, Jenny and Eric do still exist. They’ve even got quite a few lines in this episode. Eric is a welcome breath of sardonic air, bringing his level-headed wit to the whole Serena/Jenny party debacle. And Jenny didn’t annoy me for the first time in decades (although texting into Gossip Girl was old school Little J, you should know better by this point). No, this storyline’s ire is all for Ms. Serena Vanderwoodsen.

Serena’s at her best when she’s a friendly, glowy type of personality. We accept that she’s handed so much in life because she just seems to be grooving on it. But having her spend all episode pretending to be nice while really using Jenny for her selfish ends was just… too much. There’s no way that Serena truly believed what Jenny wanted was for all of Serena’s friends to come to a fancy shindig at the casa Vanderwoodsen, and so her final tell-off/storm-out at the end felt juvenile and annoying. More than that, Serena demonstrated in this episode just how selfish and not interesting she is. It always seemed like the clubbing and scenester-ness of Serena was more of a side story, that at heart she was a great best friend and interested in cooler things. Here, the show had her jumping in league with Poppy Lifton, the third most annoying character in Gossip Girl History*, and jumping on a plane to Spain. I’ve been a pretty big Serena defender over the two seasons of the show, but this episode she jumped the shark as she jumped on that plane (okay, some days, I go a bit over board with the punny language). It’s not a good sign when at the end of the episode I think it’d be more fun to be friends with Jenny (I mean hello, what makes better birthday than Hungry Hungry Hippos and Apples to Apples) than Serena.

Poor Dan Humphrey. Outside of teacher-lovin’ and Yale-acceptin’, our main Humphrey man isn’t getting much of a story. But the episode did end with him setting into motion what’s sure to be a huge storyline. Dan contacts his New Yorker piece’s fan, and we see that the fan in question is in fact his and Serena’s half-brother, Scott, who ostensibly knows about his heritage. But I hope Dan gets something interesting to do, stat, outside of just his family drama. Who knows? Maybe we could get a new, actually interesting love interest for him (or maybe, given the fact that she’s hooked up with nearly everyone else on the show, he could hook up with Blair. Or Vanessa. Damn, this show really is getting too incestuous. They’re going to have to go to college just to get new love interests).

Still, despite my character qualms, I’m finally feeling the old gossip girl flow throughout the hour I spent in the world of the Uppereast Side. It was bitchy, ridiculous, and all sorts of intriguing.

Random Thoughts:
~ It was really nice seeing the Chuckster back in school.
~ Highlight of the Vanessa and Chuck Team Up is when Vanessa cruelly says to Nate (pre-anything physical actually happening): “We’re not a couple. Just physical.”
~ The only times I liked Serena all episode is when she was being friendly with Dan during the party. I hope they keep these two just friends.
~ Eric’s looking hot!
~ I’d like to think this wasn’t why Vanessa seemed so much more fun this episode, but damn did that girl look good in her purple dress.

* Most annoying characters in Gossip Girl History:
1. Rachel
2. Georgina
3. Poppy Lifton (more for her effect on Serena than for herself)
4. Agnes