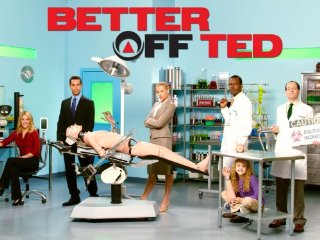 I don’t have a Whedon-based crush to blame for my checking out ABC’s premier of Better Off Ted, but I do have a creator who also worked for Andy Richter Controls the Universe (one of the all-time great, one-season, fun-as-hell sitcoms cancelled by FOX) and a pretty damn charming preview. The show is about Ted, who works at the comically vague Veridian Company (which makes things that make our lives better, like airplanes, engines, and power, and all sorts of things, but not cows). It stars Jay Harrington (Ted) and Portia de Rossi (as Ted’s boss, Veronica) and has the kind of comically off tone that made Andy Richter and Arrested Development all sorts of awesome, including fourth-wall breaking camera talking and absurdist statements like “we want to weaponize a pumpkin”. The pilot episode is pretty zingy, following the attempts by Veridian to cryogenically freeze geeky, disposable, non-Black employee, Phil. Thanks to a mover answering his call rather than concentrating on the task at hand, Phil thaws out. He’s fine, except that he occasionally screams and freaks people out, so now the company wants to fire him. Which as Ted’s borderline-cute/annoying daughter points out, is just plain wrong.

The series-long storylines seem to be the convoluted/dysfunctional relationship between Ted and Veronica (Portia de Rossi in a truly fantasticly absurd turn), who one day decides that her and Ted should sleep together, then rolls over, checks her watch, and heads out. The other non-daughter woman in Ted’s life is Linda, the oppressed, creamer-stealing product reviewer who easily tosses off lines like “I also scratched the words place scrotum here on the lunch room table. But then it just became the thing to do.” She’s a good match for Ted, and their chemistry/awkwardness works very well in the context of this odd, witty satire.

The show works damn well, as a goofy offspring to all the shows mentioned but adding it’s own, unique spin on the whole thing, but it’s also one of those shows that has “misunderstood and soon to be cancelled” written all over it. Here’s hoping I’m wrong about that part.