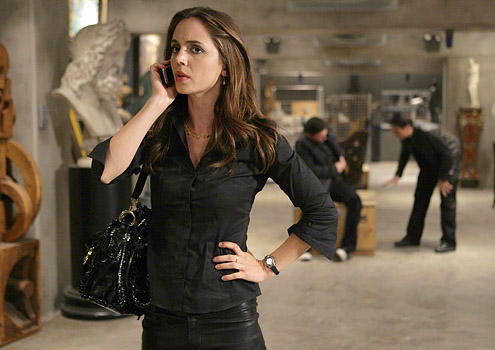 Did I Fall Asleep?

I’ll save you the suspense: Dollhouse still isn’t quite the show it could be. But this week, with the twisty and intriguing episode “Grey Hour”, it got one step closer.

Along with the second episode, “Grey Hour” felt like a well-conceived and well-executed mission-of-the-week. The plot was this: Echo was sent out as “Taffy,” a no-nonsense bank robber, to help a bunch of other best-of-the-best thieves steal a piece of The Parthenon during the eponymous grey hour (during which the security systems would be down). Unfortunately, the weaselly art expert runs off with the goods, and just as Echo’s working her mojo to get ex-cop Boyd to take out the thief, a creepy noise comes over the phone and knocks all of that useful Taffy programming right out of her head. A tabula-rasa’d Echo is now trapped in the art vault with a ticking clock and two very confused bad guys. So the execs over at the Dollhouse call up Sierra, and implant her with the Taffy map, and she attempts to help. Meanwhile, Ballard gets in touch with his bad self and a good touch of revenge when he refuses to help out desperate Victor (dolled up again).

The bank robbing hijinks not only worked to fill an hour of screen time, but it actually made sense why the client would want a doll to do it (considering how “every man for himself” most of the rest of the team was). On top of that, getting to spend a majority of the episode with doll Echo, rather than imprinted Echo, made her into more of a real character for me. Sure she was blank, but the relationship between her and her fellow bank robber was touching, and I’m going to go on record as saying I really enjoy the way Dushku’s Faith-esque-bad-girl looks offset the innocent face.

On top of that, setting up Alpha as an antagonist can only mean great things for the show. I’m glad that the Dollhouse itself is being played more ambiguously. Turning them unequivocally into the bad guys would only spell second-season doom for the show. The ambiguity Whedon and Co. are writing in instead allows the whole concept substantially more longevity.

The episode could have used a little more balance between the Ballard stuff and the Doll stuff (it’s worth noting that I could barely remember what the lovely Tahmoh Penniket did all episode besides grimace), and at times it’s still a bit clunky with the exposition, but gosh if I’m not feeling all sorts of confident that my faith in this show will be well rewarded.