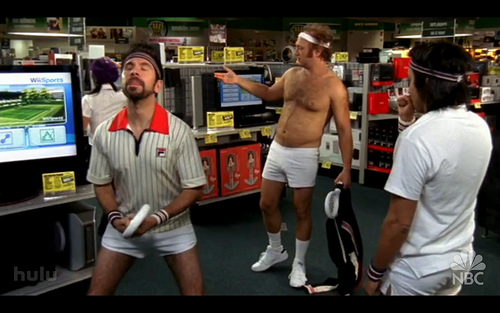 Chuck Vs. The Lethal Weapon

For those of us who love all things Chuck-y, this was a pretty up and down episode. The plot went like this: hottie-accented-spy-guy from last week escapes (conveniently) from Fulcrum to come and make googoo eyes at Sarah while Chuck clings weakly to his self-respect, and ineptly saves Sarah and Casey from gun point, before much sexier spy guy can get shot saving Sarah’s life. It was pretty well plotted, and the chemistry between Sarah and The Brit is pretty good considering it’s obvious to everyone (including him) that Sarah only has eyes for Chuckster. But it’s been done before. We’ve already seen that Sarah likes Chuck better than the muscled spooks who pop in for a few episodes to romance her (Bryce) and we’ve already had a guest star tell us that she likes Chuck a whole bundle (Bryce and Roan). And the ending, with Chuck telling Sarah he couldn’t move in with her because it would be too painful, is the exact same emotional epiphany our boy came to last week. In that sense, this week’s episode is exactly what I feared last week, that the show isn’t quite sure how to move the characters forward.

Except that I’m really not that worried. Much though I wanted Sarah to jump up from her bench and smooch Chuck, I’m willing to wait another week. And the final reveal, of Chuck finally taking the initiative in getting the Intersect out of his cranium by plotting, Veronica Mars like, on the back of his Tron poster was all sorts of awesome. It also builds into a theory I got going. Orion? Totally Chuck’s Dad (whose set to be played by none other than Scott Bakula* in upcoming episodes).

I’m glad the show didn’t let Chuck off easy by having Cole turn out to be Fulcrum, and I’m glad that Chuck and Morgan aren’t moving in together (primarily because I really like Morgan and Anna). This week really just reaffirmed for me how damn enjoyable Chuck is, even when stuck in a bit of a plot rut.

*GEEK ALERT: So Chuck’s Dad is going to be played by Scott Bakula, aka Captain Asher from Star Trek Enterprise, and the scientist on this week’s episode is played by Robert Picardo, aka The Doctor from Star Trek Voyager. Intentional nerdgasm? I’m betting yes.