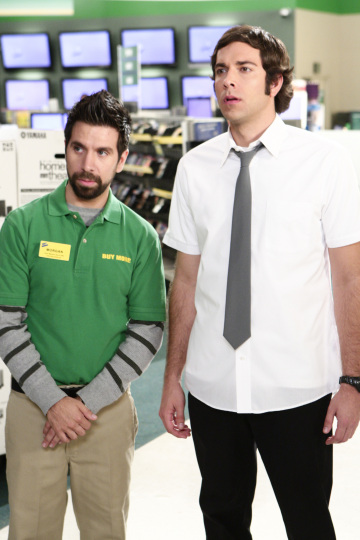 Chuck Versus the Predator

The problem with the current Chuck storyline (basically, Chuck’s continuing attempts to get the Intersect out of his head and regain his normal life) is that it leaves us, as the audience, secretly rooting against our protagonist. If Chuck regains his normal life, even if he’s able to finish school and get a real job and a real girlfriend, he’d be boring and the show, which we have invested so much into, would cease to exist. Having our main character continually wishing the end of the show on us is a bit… odd, to say the least. Add to that the fact that as the Intersect, Chuck can be a legitimate asset (pun somewhat intended) and help people, save lives, and protect the country, and you’ve got a conundrum: while on a human level we may understand Chuck’s desire to have something more than what he’s been given, on a television and thematic level his single-minded quest to rid himself of the nuisance that is his brain computer leaves him nothing more or less than selfish. On Buffy, this was a constant problem, too, in that Buffy would occasionally (especially for the first couple of seasons) wax poetic about her desire to return to her normal, cheerleader existence. But at the end of the day, she had to recognize that while she never asked to be Chosen, she has skills and abilities that can help save the world, and her nature required her to use them for good. I know Chuck‘s not Buffy, and Chuck (the character) doesn’t pretend to be that noble, but it’s still a point of contention for me as I watch the show.

On top of that, Chuck’s old life wasn’t all that good. He’d been in a holding pattern since being kicked out of college, sans a girlfriend since the unremarkable Jill unceremoniously dumped him, and living with his sister because he was too afraid to be an adult. Plus, when you think about it, his old world was entirely defined by the CIA. Bryce framed him in college so he could get away from the CIA. Jill dumped him because she was turning Fulcrum. Every single motionless part of the next ten years, therefore, was defined by their relationship to the CIA. Still, I want Chuck to be able to move on, emotionally and maybe even professionally, I just wish he could realize that he can do that and save the world.

Which isn’t to say that the storyline isn’t leading us to some really cool places. Chuck taking control of his own destiny and having to work against his handlers (who seem especially intrusive this episode, and I find myself thinking seriously about the privacy limits of Chuck’s constant surveillance) is an interesting concept. The idea of the war between Fulcrum and the US government escalating is awesome. I even like the place they’re taking us with Orion. It’s just that by the end of this episode, I was pretty sure that if I had to hear the words “I will get my old life back” one more time, I was going to explode.

Other than that, this was a pretty solid episode. I liked how the Buy More storyline intersected (oh man, the puns keep on coming) with the spy game. I liked finally seeing Beckman in real life, and Sarah standing up to her was pretty cool (aside from that, though, this was a pretty Sarah-lite episode. Very little asskicking to be had). I especially liked the confusion of identities scene in the Buy More when the dueling robbers, all clad in black masks, were mistaken for each other more times than in a Shakespeare play. I loved that Sarah knows Chuck well enough to know that if he’s not barging into their meeting with the General then something is definitely wrong, and I like that she was legitimately hurt that he didn’t confide in her about his investigations. I think the whole Chuck and Sarah storyline works much better when we focus on her loving him but not really knowing how to trust that and what to do with it outside of her professional fidelity. And I liked the final implications of the episode, from Beckman taking a much closer look at the fairly unprofessional relationship between Chuck and Sarah to Chuck deciding to one hundred percent go off on his own with his efforts to understand the intersect.

I think the show is building towards Chuck realizing that despite his best efforts, he’s actually pretty good at partnering with Sarah and Casey. When he was in charge tonight, from foiling the mistaken predator attack on both Buy Mores, to the overall mission at the Buy More, he was an authoritative Chuck that we’ve somewhat missed during the Cole storylines.

* The Cylon eye on the predator

* Chuck, in command of the two missions at the Buy More, and specifically with his authoritative shout of “Go now!” during the first showdown.

* Beckman, upon seeing Casey’s much beloved Ronald Reagan picture, saying, “Wake up Casey. The 80s are over.”