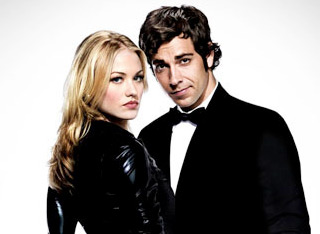 This week’s Valentine’s Themed CHUCK offering was everything I could hope for as a diehard. The Chuck and Sarah tension was perfect. This week’s mystery (involving a cul–de-sac full of Fulcrum) was satisfying, intense and funny. Even the Buy More stuff (so often the downfall of other wise fantastic episodes) was spot on and heralded new awesomeness to come (although speaking of Awesome, where was he all episode?). But even more than the awesomeness that was this week, I can not wait for next week and the week after. When did Chuck become the most exciting show on television (save possibly for BSG, which has the unfair advantage of being a precious commodity)? This season, it hardly ever disappoints, and more than likely is elevating its game each and every week.

The best part of this episode was also one of the most downplayed, and it actually fixed something that I’ve long thought needed fixing on Chuck. You see, up until this episode, the only truly special thing about Chuck is the intersect Bryce put in his head. Sure, we’ve seen flashes (haha) of brilliance, and there were indications that the CIA would have picked him up if it hadn’t been for the sabotage of Bryce, but still, it was basically the computer in his skull that made Chuck a commodity and therefore it seemed like his usefulness to the CIA would run out. But this episode it was made abundantly clear that not only is Chuck the only person on Earth with a computer in his head, he’s the only person on Earth who COULD. That’s right, Chuck Bartowski, every man, has his very own, very geeky superpower. And I love it.

Plus John Casey (Adam Baldwin) consistently bringing the Bad Ass goodness and Sarah
s heartfelt goodbye to the closest she’ll ever get to domestic bliss made this episode one for the record books. I can’t think of another show on (Network) Television that has been this hot in a while.