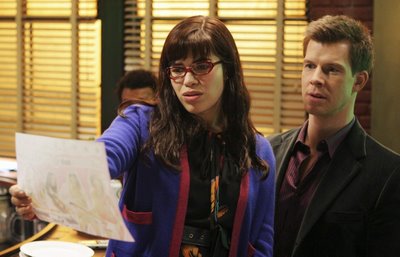 While I agree with Rachael that it is ridiculous for the Suarez family to blame Betty for pursuing her career and that they only support her when it’s convenient, I can’t help but feel that they have a bit of a point.

Absolutely, Betty should have gone to that networking party instead of staying home with Hilda. But she also should have gone straight home and convinced Daniel to entrust the dress pick-up to someone else (the ever-reliable Marc springs to mind).

And yes the episode ending was unfair and doesn’t fare well for the episodes to come. And who wouldn’t silence their cell phone to talk to their idol? But perhaps setting it on vibrate could have solved all the problems- that way you can ignore it but also be aware if you’re receiving an alarming number of calls.

But the main reason why I refuse to jump right to Betty’s defense on this issue is that I really don’t like the girl. Easily my least favourite character on the show, Betty somehow manages to be selfish, clueless and preachy all at the same time. She disregards Marc on a regular basis: expecting him to help her whenever she wants, rubbing it in his face that she got him into YETI and generally assuming that he’s not as clever or decent as she is (when Marc, in fact, is one of the smartest and most engaging characters on the show). She does the same thing to Hilda.

It’s one thing to make sacrifices to follow your dreams, it’s quite another to perpetually act on a sense of entitlement.