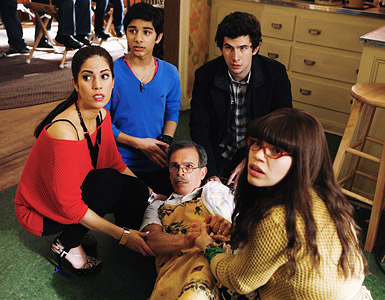 This week’s Ugly Betty focused on one of my least favorite story lines of the series, one which has colored every single season of the show thus far but which I thought we had finally left behind at the beginning of Season 3: the “Betty’s family thinks she’s choosing work over them and gets mad” storyline. The worst part about this, aside from her family being really unfair to her whenever it happens, is that the show tends to side with her family.

This week featured Ignacio saying to Betty, “No one supports you more than your family!” To which I screamed at my laptop “Except you don’t support her anytime it’s inconvenient for you!” Any time Betty’s work life interferes with her home life, which, let’s face it, is going to happen if Betty wants to get into a competitive (dying) field like magazine publishing, her family suddenly loses all their supportive instincts. Betty skipped a meet-and-greet with her classmates to hang with the fam, she stole supplies from Mode to use in Hilda’s gift baskets, and she showed up to her sister’s party and helped make cheese squares despite being practically fired that same day. She works her butt off at Mode and YETI, and her family only gives her crap for it. Don’t get me wrong, most of the time I love the Suarez clan, but on these episodes, of which there have been far too many throughout the series’s run, I find it tiring. We get that Betty’s torn between Brooklyn and Manhattan, but I prefer when that’s put more subtly and less blatantly.

In view of all this, the ending of this week’s episode felt manipulative and cruel. Because Betty missed a call from her sister to speak to her absolute idol, she misses her father’s heart attack. If Karma exists in the Betty universe, she must have done something pretty bad. But all she really did was take an opportunity that was handed to her. And I’m not looking forward to next week, watching Betty wallow in her guilt over this week’s episode and Hilda self-righteously tell her off about it. I get what a huge deal this was for Hilda, and I’m certainly aware that Betty has a selfish (or at least self-centered) streak to her, but this was not a well-written enough episode to make me side with the family.

Betty can be a fun, good show when it has it’s stuff together, but this week’s wasn’t either fun nor good.*

*Although I must say, I sort of love Connor and Willi, and not just because Connor looks like a slightly less menacing Daniel Craig.