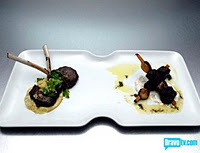 I jumped on the Top Chef bandwagon last summer after watching an SNL rerun in which they made fun of last season’s Chicago deep dish pizza challenge. At the time, the series (Top Chef, not SNL) was part way through airing its 4th season in Canada (the US run of the show having been finished months earlier).

I was hooked instantly. Earlier in the summer I’d discovered Project Runway, the only way to improve on that great show is to forget about dresses and make risotto instead! and that’s what Top Chef is. It has an effective format, engaging judges and host, diverse contestants, interesting challenges and the right balance between interpersonal and competition-based drama.

In last night’s season 5 premiere (available on bravotv.com), we were introduced to 17 new contestants who will be competing in this year’s competition in New York City. Two were eliminated in the first episode, falling victim to an apple-based quickfire and a “cuisines of NY neighbourhoods” elimination challenge.

There are some promising personalities, though there are also a couple people who will drive me up the wall (there’s a crazy woman who consulted her “spirit guides” on how to cook Russian food). And though we’re still at the point in the season when it’s impossible to remember who everyone is, the dishes all looked good enough to instill confidence that this will be another great season of Top Chef.

*the photos are the winning and losing dishes from this week’s elimination challenge, respectively.