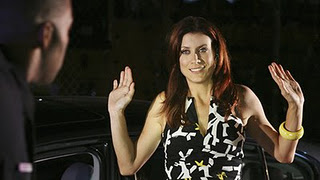 This week’s Private Practice made me kind of mad. It had so many problems I barely know where to begin.

Let’s start with Addison, because that’s where the focus of the show should be. I used to love Addy, she was one of my favourite doctors at Seattle Grace and though she’s been immature much of the time since she’s arrived at the LA co-op, she’s generally been an OK character. This week she crossed the line into someone I wanted off the screen as soon as possible. Not only did she act incredibly stupidly and immaturely in her relationship with Kevin but she also was completely unprofessional in dealing with an issue of morality at work. She threw multiple fits about loyalty within a marriage, preaching at people when she was the one who cheated on Derek. Her standards are lower, her wit is less cutting, her genius is hidden, her compassion is preachy, her hair is too dark, her skin is too tan and she wears too much makeup. I miss the Addison of Seattle Grace.

Next, why does Dell have a kid? That seems like a bit of a stretch to me. And while I’m all for deepening his character (God knows the show could do with more Chris Lowell), giving him a weird teen pregnancy/ex with a drug problem past doesn’t seem like the right way to do it.

And if Charlotte’s opening her own practice won’t we now have 2 boring private practices and no interesting hospital?

Another problem: why does everything Sam and Naomi do professionally have to tie in metaphorically (but not at all subtly) into their personal lives? Naomi’s speech about the man who will always love his wife could not have been more contrived.

And finally, if you have Alexis Denisof, don’t give him a thankless role. At least when his equally brilliant former Angel co-star Amy Acker was on Private Practice (in the season premiere) she got some screen time and a legitimate moral dilemma. The superb Mr. Denisof just got to say “I love them” a couple times then be glared at by Addison (and the many people watching at home who now hate him). Why he took that role I’ll never know, but it saddened me to see my beloved Wesley treated so badly by a batch of writers.

Cooper did his best but even he couldn’t save this show.

Thanks for nothing Shonda & Co.