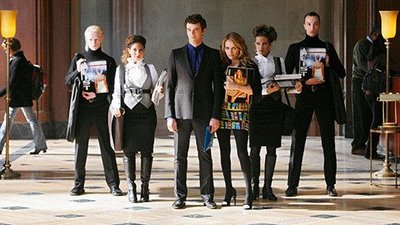 I don’t think I have loved an episode of Ugly Bettyas much as I loved this one in a VERY long time. Not only was Betty’s storyline engaging, Daniel had multiple lovely good guy moments, Christina and Amanda both made amusing appearances, Wilhelmina’s storyline was a very humanizing one and the episode was very Marc heavy as well as featured a wonderful Justin subplot. And you all know how I feel about those two fabulous men, they are my favourite characters hands down.

Is it wrong that the entire time Betty was pitching for YETI, I was cheering for Marc? The very idea that Betty didn’t know how much Marc wants to be an editor was almost insulting, how self involved do you have to be to miss that? I’m glad she gave up her place to let him in though. After all, who would Betty be if she couldn’t martyr herself to cover up her selfish flaws? I loved Marc in this episode. I was proud of his presentation and all the work he put into it. And I understood when he sank low enough to tell Betty that she was accepted because of her race, he was hurt and his seriously bitchy tendencies came to the forefront. The final phone call between Betty and Marc was very sweet, I’m glad that the writers didn’t let the episode end on a negative Marc note. And Wilhelmina’s acknowledgment of him at the end, so touching! I think Betty is always at its best when showcasing the amazing Julliard-trained talent that is Michael Urie.

And speaking of flamboyant yet flawless, Justin is my other favourite, oft ignored character. This episode was his obligatory “my friend won’t be my friend because I don’t fit in with his friends” episode; and even if the story’s been done a thousand times before, no one has hit it out of the park quite like Marc Indelicato (with the help of Ana Ortiz). But the chemistry between Justin and his friend Randy made me wonder: how long will it be before Justin officially comes out and is given a love interest? There’s a wealth of Justin stories to be told, as long as the writers are brave enough to jump into that territory.

So, with 2 uncompromisingly funny, fashionable and sympathetic gay characters leading the pack in this wonderful episode, there’s really only 1 word for it: fabulous!