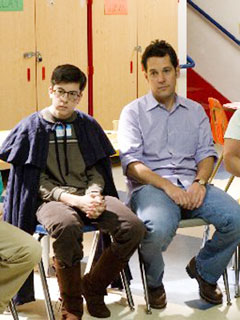 First of all let me beg your forgiveness for the impossibly bad pun in that title.

Now, on to business.

Tonight was a night full of FRIENDS (the 90s NBC sitcom, in case you didn’t catch on). Jennifer Aniston’s highly anticipated guest appearance on 30 Rock was pretty funny and FRIENDS references were everywhere (the episode was even named “The One With the Cast of Night Court” after FRIENDS’ signature episode title format).

But the real comedy of the night was not provided by the Emmy winning headline stealer, but rather by her former co-star Paul Rudd (who played Phoebe’s husband Mike). Tonight I saw his new movie Role Models, which he both co-wrote and starred in, and it was fantastic.

I loved Rudd on FRIENDS as well as in Clueless and he has been one of the most consistently funny aspects of the many Apatow movies he has appeared in. In Role Models, free from the Apatow umbrella and in a rare leading role, Rudd really shines.

The movie’s premise (2 screwups get court-ordered community service to mentor kids) doesn’t hold a lot of promise but the movie itself delivers beyond all expectations. The characters are all, with a few exceptions, really engaging. The writing (both plot and dialogue) is very clever (as well as delightfully film reference-laden). The film is perfectly cast (the impossible happened, I liked the McLovin kid, I loved him in fact), the story is sweet yet somewhat surprising and I laughed the entire way through.

So though NBC’s reliable Thursday night comedy lineup delivered on their average, the silver screen was the winner of this FRIENDS-filled night.