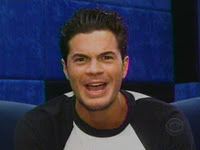 I’ve just finished watching Big Brother 2 on YouTube and I’ve gotta say how vastly superior it was to more recent seasons. Despite some obvious format kinks that would later be worked out (the veto being added, the format of the final HOH competition, renovations to the house, changes to luxury and America’s choice competitions, the jury in sequester, etc…) Big Brother 2got it right. The houseguests were much more diverse than in later seasons. Not specifically in terms of race or sexual orientation but in age, geography and personality they differed greatly. This resulted in some of the most dynamic relationships ever on the show.

There was also less sexual exploitation on the show in the earlier years (probably a symptom of the older cast). Which isn’t to say that there weren’t steamy hot tub games and people making out in the storage room. But the competitions tended to be more “build a giant Jenga tower” as opposed to “use each others’ bodies to transport butter” which kept the gross factor down a bit. Any and all of the sex and romance on the show was completely contestant initiated, instead of the producers forcing it. This, and so many other factors, made season 2 more of a social experiment than the newer seasons (which are populated entirely by aspiring actors trying to make their mark).

The cast itself in season 2 was so dynamic, in fact, that even without the added drama of the veto, every episode was enthralling. I liked and disliked every single person in the house at some point. They were all complicated and interesting and even the ones I disliked had their redeeming moments. Shannon, for example, was capable of cruelty that can send your memory spiralling back to middle school. But I sort of loved her. She reacted harshly and defensively when she felt like she didn’t fit in, which manifested itself in bitchiness. But she knew her own faults and at times they even tore her apart- fascinating. And Kent, the small minded geezer from Kentucky, befriends the gay guy? Or what about Hardy? the buff pretty boy with the heart of gold who can bench press 4 million pounds and breaks down in tears every other minute. Say what you will about reality contestants but these people were interesting. In fact, my lists of favourite and least favourite Big Brother contestants were extended more with season 2 than with any other season (excluding All Stars); Hardy, Monica and Autumn are added to the least favourites list while Nicole makes the favourites list alongside Will (who’s been there for a couple years now).

Actually, you’ve read in the past as I’ve complained about Big Brother always ending wrong. The final 2 are never the most deserving and if, perchance, one of them is, the right person never wins. Not with season 2. In season 2 people seemed to be voted off in exactly the right order. Now I could say that Monica shouldn’t have made it as far as she did or that Sherri was never given a chance, but ultimately, the best people made it to the top. Nicole and Will were hands down the best players in the game, manipulating the entire house in both similar and completely opposite ways. And Will’s win was definitely deserved.

Despite being rife with troubles (violent behaviour resulting in the expulsion of a houseguest, an evictee being diagnosed with cancer before the finale, the 9/11 attacks occurring during the show and a houseguest being personally affected, etc…), season 2 of Big Brother may just be my favourite season to date. I’ve always loved season 3, season 10 was great and All Stars was certainly brilliant but the combination of an engaging cast and the right people coming out on top might just push season 2 over the edge.