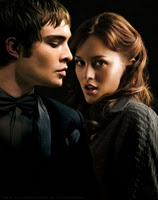 Let’s Start the Season with…

A Little Indulgence.
Tonight marked the real beginning of this season of TV over on the CW with the season premieres of Gossip Girl and One Tree Hill. Fox also kicked off their new season of Prison Break tonight (I promise a review of Sara’s promised return as soon as I view the episode online).
So let’s get started for the season with 2 of my greatest TV indulgences:
GOSSIP GIRL
In a decent but by no means great episode, the gang moves their drama to the Hamptons where Serena, Nate and Chuck have been spending their summer. Blair returns from Europe with a boring new love interest and some hilarious one-liners (“that Chuck Bass-tard” and “that mother Chucker!”). Dan and Jenny invite themselves to the Hamptons after disappointing summers in the city. Jenny has reformed, apologized to her only friend, Eric Van Der Woodsen, and begun earning her way to the top through talent, not scheming. Dan, who has been fighting off his desire to mope by over-dating, makes his way back to Serena with the help of a new incarnation of Serena’s grandmother. Nate proved that even characters I like can be complete morons (he’s sleeping with a married woman). The White Party featured perhaps the best outfits yet on the series and Chuck and Blair offered up some of the best scenes of the series. There are few more engaging couples on TV than these 2 bad seeds and their torrid romance. It’s very Catherine and Heathcliffe- you have to love it.
ONE TREE HILL
With a similar degree of quality, One Tree Hill produced an average episode complete with tons of cheese, a few good laughs, a couple sweet moments and some stomach churningly bad plot. Firstly, this show uses the “dream sequence mislead” so often that it would have been a twist if they hadn’t started their season that way; anyone who didn’t catch on the second it seemed as if Luke had chosen Brooke clearly has never seen the show before. Of course it was Peyton, it’s always been Peyton, it had to be Peyton. I did enjoy the card trick with 3 queens and “following the heart”, a little obvious maybe, but sweet. In other news, I had just managed to forget that Skills (usually a favourite of mine) is sleeping with Deb and then they had to go and remind me- I miss Bevin!!!! Mouth is gone. I’ll miss Millicent and the lovely presence of Stewart Minkus (Lee Norris’ Boy Meets World role) on the show but it’ll be a relief to be rid of the speechy and useless Mouth; that said, his goodbye with Brooke was great, though Millie’s was better. Other observations include: NANNY CARRIE IS NOT INTERESTING!!! GET RID OF HER!!! AND NO ONE CARES WHAT HAPPENS TO DAN!!!, I don’t know why but I completely care what happens to Brooke, I like her… and, as one last note, I must reiterate that Jamie is the CUTEST KID EVER. The TV Addict called him the cutest child actor since the Jerry Maguire/Stewart Little kid and, as usual, my Torontonian TV Blogger Idol is right. Highlights of the episode include Jamie and Hayley hip hop dancing in the living room and Nate’s line to Skills “dude, did you just ask me if my mom was satisfied?”- it’s funny ’cause it’s awkward.