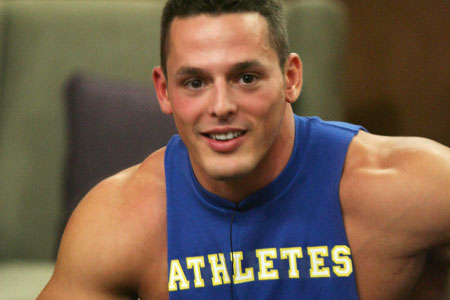 “Jessie is a tool in all senses of the word” -Steven
No truer words ever were spoke.

Here’s the rundown of my current feelings towards most of the house guests.

Jessie– You tool! Get off my TV screen! Your nominations are moronic (Dan will make a perfect ally for whomever snags him first, Steven isn’t an actual threat at all and if you hate Renny so much do us all a favour and try and get her evicted). Also, so what if Steven slept through your HOH room reveal, stop acting as though you are entitled to respect. Oh… and LOVE YOURSELF LESS- there’s not much there to love.
Keesha– much cooler than I thought she’d be
Libra– way less cool than I thought she’d be
Jerry– that was a lovely moment when you talked about your wife and what you would do for her but seriously, stop talking about the military and stand on your own two feet
April– though I thought I might like her, she’s quickly become one of my least favourites: irrational, emotional, whiny and a tad bit whorish
Ollie– I don’t hate him, even though he has eyes for a loser, is overly religious, seems to believe that you can become an alcoholic by tasting wine and is responsible for Brian’s eviction. I still don’t fully hate him… quite the feat.
Memphis– the only thing I don’t like is the facial hair. Otherwise, he may soon become a favourite of mine (hey, Brian called it).
Dan– not as dumb as he looks. He may be stupidly loyal but he managed his outsider status the best he could after Brian’s eviction, hasn’t stepped on many toes, tends to say the right thing and, despite his sheltered catholic life, seems relatively open minded about the world. I’m really rooting for him.
Renny– ridiculous. Go Home.
Angie– poor girl. She’s easily the chillest girl in the house but is being ostracized for trying to save Brian (not out of fierce loyalty but because he was a fun guy who didn’t make her want to pull her hair out). I like her, leave her alone.
Steven– poor guy. I REALLY like him. Unlike token gay contestants of the past, Steven doesn’t play it up. He’s not over the top or overly feminine or any of the many forced stereotypes that tend to show up on Big Brother. Instead, he’s low key, he’s fun, he’s loyal, he’s not a kiss ass and he’s got a good head on his shoulders. The only thing I’d question is the ridiculous hat on top of that head.
Apparently, this season, if you’re smart and fun and not a self-absorbed moron you’ve got a huge target on your back- a lesson in life, I’m sure.