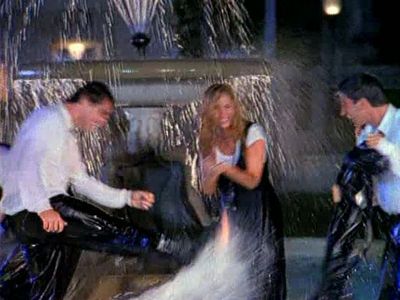 Let me take a moment to complain.

Why do very few shows still allow time for an opening credits sequence? Once upon a time around 8:03pm every Thursday night, an entire continent would clap along as The Rembrants sang “Ill Be There For You”; it was pretty cool.

Nowadays opening title sequences have been replaced with a 3 second logo and a couple chords of music (if lucky). I, for one, really miss a good old fashioned theme song.

Thus, in memoriam of this dying breed, I present my list of TV’s 21 greatest opening title sequences:

21) American Dreams– historical clips, show footage and the use of the song “My Generation” all blended together to make an engaging and reflective title sequence for the show.

20) Joan of Arcadia– seriously… what if God WERE one of us? The images of historical figures through whom God worked coupled with the song made this sequence hugely thought provoking.

19) The Simpsons– at this point is there any point in arguing with anything about this show? everything from their envelope pushing satire to their ever-changing open sequence has become the standard to which comedy is held.

17) Beverly Hills 90210– the theme song and infamous blue background cast spots are still the epitome of glamorous and hip a decade after the fashions of the show have gone out of style.

16) The Cosby Show– dancing Huxtables: who could ask for anything more? This show changed its opening sequence multiple times but the one that featured each member of the Huxtable family dancing in his or her own style was one of the greatest opening sequences of all time.

15) Gilmore Girls– MOMMY!!!!!!!! I can’t hear “Where You Lead” without the lovely images of Gilmore Girls‘ sweet opening titles filling my head… and then I miss my mommy.

14) Big Bang Theory– The Barenaked Ladies sing a great theme song that reflects the nerdy nature of the show but refuses to make fun of it. It really works well.

13) Golden Girls– this show may belong in the geriatric ward but its big heart and “thank you for being a friend” sentiments, showcased in the opening sequence, reach even the most cynical of young hearts.

12) Dawson’s Creek– the opening chords of “I Don’t Wanna Wait” took on an entirely new meaning when this show hit it big and the song became synonymous with the lives of Capeside’s entertaining youth. Watching the clips used in the first season’s opening sequence, one can’t help but wish they were in on the fun right alongside Dawson, Pacey, Joey and Jen.

11) Buffy and Angel– these two shows have very similar opening titles so I think they both get to be included as one. Mixing tradition and rebellion in their music and images, both shows reflect their tone perfectly through their opening sequences. The clips they use are also pretty bad ass and there’s nothing like one of those final “group charging off to save the world” shots.

10) Cheers– “sometimes you want to go where everybody knows your name”. Classic.

9) All in the Family– perhaps even more classic, however, are Archie and Edith Bunker sitting at the piano in their living room and singing “Those Were the Days”.

8) Family Guy– a comical throw back to the days of Archie and Edith, Family Guy takes a classic opening sequence and makes it sparkle with satire and sequins.

7) Six Feet Under– with an eerie instrumental theme song and perfectly chosen morbidly beautiful images, the Six Feet Under opening sequence is somewhat unsettling yet artistically poignant and beautiful, just like the show.

6) Popular– As the gorgeous cast assembles for a glamorous photo shoot, the lyrics “we hate supermodels… it’s just that I’m tired of being compared” sell the satirical point of the show perfectly. Also, I just love that song by Kendall Payne.

5) The West Wing– for some reason The West Wing theme song gets me every time. Maybe it’s the way a Sorkin teaser transitions on a perfect upbeat into the swelling cords of the theme but I can’t help but love the show even more every time I hear it. The images are also beautifully chosen and really reflect the majestic tone of the show.

4) How I Met Your Mother– Though this credit sequence is very short, “Hey Beautiful” is a great theme song (from executive producers Carter Bays and Craig Thomas’ band no less) and the photos they use make the characters seem like real friends and not posing actors. The credits really help to sell the central friendships of the show.

3) Mad About You– star Paul Reiser wrote “Final Frontier” to represent the show as its theme song and it, coupled with the beautiful black and white still shots of Paul and Jamie, really does encapsulate the essence of the marriage at the centre of the show: fun, poignant, beautiful and full of love.

2) Slings & Arrows– every season this Canadian gem came up with a new hysterical theme song that played on aspects of the Shakespeare play at the centre of the season. “Cheer Up Hamlet”, “Mackers”, and “A Walk in the Rain” still make me laugh every time I hear them.

1) FRIENDS– the classic scenes of the friends dancing in the fountain to the tune of their iconic theme song “I’ll Be There for You” became TV’s most memorable opening sequence. To millions of fans, that song did and always will represent 10 seasons of big hearted hilarity.