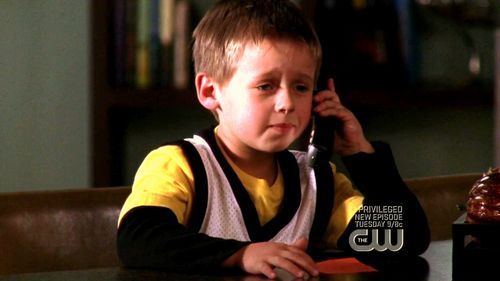 Make no mistake, I know it’s not art. One Tree is intense frivolity that I watch because Ive always watched it and I can’t abandon characters without knowing what happens to them. Thus, I watch One Tree Hill and get mildly depressed at the state of the “vast wasteland” that is television at the moment but mostly I’m able to block out the idiocy and appreciate One Tree Hill for its good qualities: a few laughs, a dash of sappy happy, pretty good music and 2 very cute boys. This week’s episode, entitled “For Tonight, You’re Only Here to Know”, however, broke new ground on bad and I simply couldn’tignore it.
The episode was meant to be an homage to the earlier school shooting episode. The girls were locked in the library where Lucas and Peyton took refuge after she was shot while the boys mused about the lost lives and support of Jimmy and Keith while gearing up for the first Ravens game of the season. Mouth was supposed to do his first official report on the Ravens at his new job. The episode also served as the “getting rid of the evil nanny” episode and the “Peyton and Lindsay find new respect for one another and learn to be friends” episode.

It could not have been cornier if it had tried. The satirical high school drama “Popular” was less cheesy, and that was the whole point of that show. The girls played games in which they each had to compliment each other or decide which body part to eat first if they were starving and one of them died- ew!!! Mia learned to deal with criticism “creation vs. criticism”- ohhh insightful!!! Brooke contemplated her mother’s role in her life, Lindsay broke down about the death of her father, Hayley mused about nothing and Peyton, well, Peyton seemed to be coming on to the other girls throughout the episode while (STILL) sulking about Lucas and being generally bitchy. On the boys’ side Lucas gave a ‘rousing’/incredibly pathetic, badly acted and formulaic pep talk to his team, Nathan vowed to “stop being [his] father and start being the dad Jamie thinks [he is]” after telling Lucas about evil kissing nanny, Jamie got to be part of the team (since when does a team of bad ass high school ballers chant a 4 year old’s name?) and Mouth (topping them all) completely disregarded his assignment to report on the basketball game and decided to wax poetic about other sappy and irrelevant things instead.

Dear Mouth: that is not what reporting is. We put up with Lucas’ pathetic voice overs because his sentimental hogwash was supposedly part of his book, you’re a reporter- REPORT!!!

Low Points Include:
– everyone singing the lyrics to Mia’s “new” song in their own little worlds as if they applied to them even though they really didn’t
– the basketball team hilariously chanting Jamie’s name before their own big game
– the team apparently having won off camera even though when the girls were checking the score from the library they were losing completely and the team has been established as sucking, except for one guy
– Lindsay’s breakdown about her dad: badly written, badly acted, bad… just bad
– the girls’ lame excuses for not being able to get out of the library (“they’re fixing all the doorknobs”, no cell reception, dead batteries, etc…)
– the slow motion walk of the Ravens led by suited up Lucas, Nathan and Skills and featuring a decked out Jamie in Ravens gear as they head towards the game
Saving Graces include:
– the reappearance of Tim (a formerly terrible character) as a decent guy, with a life, a kid and a whole lot of regret and sadness (surprisingly the least corny part of the episode, I really liked it actually, it showed a character who has actually grown for the better and the worse in 4 years instead of just changed their relationship status)
– the only scene with the evil nanny we had to put up with was her quitting… here’s hoping she’s gone for good
– Jamie could not be cuter, he simply couldn’t be.
– I do actually like Kate Voegele (Mia)’s voice/songs (they’re over used but effective and she’s a lot less annoying than Tyler Hilton was on the show)