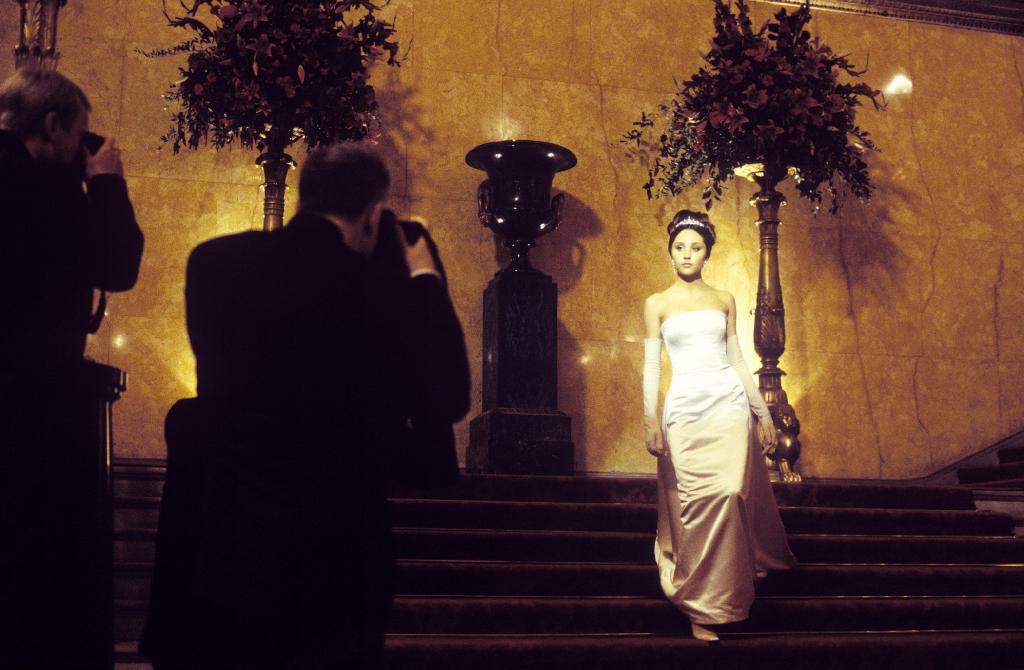 I’m resolved not to blog about TV and Film until after the writers strike but that doesn’t stop me from posting lists. Inspired by EW’s list of best “top of the staircase moments”, I present to you my list of lists:

BEST “TOP OF THE STAIRS MOMENTS” in FILM. THE BIG, BEAUTIFUL REVEAL MOMENTS
– Pretty Woman the red dress reveal (Julia’s defining breakout moment)
– Eliza Doolittle’s appearance at the ball in My Fair Lady
– Princess Diaries: both the before and after makeover reveal and Mia’s entrance in her ball gown at the end
– What A Girl Wants: the reveal of Kelly Preston there to support her daughter and remind Colin Firth how much he loves her.
– Keira Knightley’s entrance to her wedding as Juliet in Love Actually
-Tracey Turnblad (Nikki Blonsky)’s triumphant entrance from the hairspray can for the finale of the movie musical version of Hairspray
– Jennifer Lopez dazzles Ralph Fiennes in her pink dress and borrowed jewels in Maid in Manhattan
-the first appearance of Guy as Josie’s high school ideal in Never Been Kissed
– Aurelia comes into Jamie’s view at the restaurant where he has come to propose in Love Actually
– the crowd-parting introductions of Michael and Kimmy in My Best Friend’s Wedding as well as Rupert Everitt’s heroic swoop-in at the ending.
AND THE BEST “top of the stairs moment” EVER…
-Drew Barrymore as Danielle aka Cinderella’s “Breathe, just breathe” memorable entrance to the ball in Ever After.

TV’S STRONGEST LADIES: the tube’s boldest and most brilliant bombshells
– Veronica Mars (the smart, sassy and strong sleuth who taught us all that thick skin and a big heart are a powerful combination and that its cool to love your dad)
– Tammi Taylor (this Texan beauty is a prime example of strong modern woman- raising a teenage daughter, coping with a new baby, acting as a mentor to high school students as their guidance counsellor who really cares and keeping her head around the brain-numbing book club women of Dillon while maintaining a strong and equal partnership with her football coach of a husband on Friday Night Lights)
– Lorelai Gilmore of Gilmore girls (pregnant and alone at 16, Lorelai left her privileged life behind and built a new one for her and her expected daughter. She became a successful business owner, beloved friend and the mother of the most successful young girl on TV- that takes unparallelled independence and strength of character)
– Sydney Bristow on Alias (this big-hearted super-spy saved the world more times that I can count while dealing with multiple heartbreaks, the loss of friends and a whole lotta daddy issues. and she did it all in fancy wigs and heels)
– The Walker Women of Brothers & Sisters ( sisters Sarah and Kitty and their mother Nora have their share of problems but are perfect examples of smart, strong, independent women who aren’t afraid to speak their minds. They are strong and supportive mothers and high powered career women, unflinchingly brave in the face of their father/husband’s death, their brother/son going off to Iraq and the other multitude of obstacles they face in their lives (including divorce, a father’s infidelity, a miscarriage, a nephew’s infant death, custody battles, a daughter’s illness, a loved one’s addiction, corporate issues and a presidential campaign)
– Lynette Scavo (this desperate housewife fought cancer while fighting to protect her kids’ tree house, fighting to keep the family business afloat, fighting for her marriage, fighting for the loyalty of her friends and fighting her mother. She’s tougher than most superheroes while caring more for everyone and everything than for herself)
– Miranda Bailey, Christina Yang and Callie Torres (these brilliant and independent women of Seattle Grace Hospital have fought through the trenches of drama at Grey’s Anatomy and come through their respective traumas a head above as the some of the most capable ladies on TV.
– Addison Montgomery (though she’s lost some of her luster since joining Private Practice, let us not forget the brilliant, funny and compassionate woman, the best neo-natal surgeon in the country, who still lives beneath her insecurities)
– Betty and Hilda Suarez (Hilda lived through her fiance’s death and is still there to restore her sister Betty’s faith in the world as the independent Ugly Betty continues to forge her own path through the fashion industry)
– Jamie Buchman (Mad About You‘s independent career woman showed the world that a woman doesn’t have to give up her dreams of a career for her dreams of love. Jamie’s sense of self and sense of humour are what made her equal partnership with her husband Paul so enchanting and endearing)
– Kate Hennessy (on 8 Simple Rules, after her husband’s death, Kate was able to keep her household running smoothly by juggling a career as a nurse, 2 difficult teenage daughters and a mischievous son seemingly effortlessly. Supermom personified, Kate was the sitcom version of Lorelai… times 3.
– Miranda Hobbes and Samantha Jones (Sex and the City‘s high-powered career women spoke their minds and were unashamed of their sexuality, intelligence and independent spirits. What sets these women apart, was their abilities, in the end, to bravely open themselves up to relationships that could leave them vulnerable. They were independent and strong yet unafraid of being hurt or left alone).
– Lost‘s Kate, Sun, Anna Lucia and Libby (2 of these women are/were kick-ass power houses who were known to wield guns and hike into the jungle. they are the heroines, just as strong as the men of the island. The other 2 are perhaps even more impressive in their resourcefulness, intelligence and resilience. Sun shows a constant strength that her small stature doesn’t even hint at while Libby’s compassion was all that kept Hurley from plunging off a cliff. These 2 women show that you don’t have to be an adventurer to be a hero)
AND TV’s ULTIMATE KICK-ASS HEROINE…
– Buffy Summers (this vampire slayer, who vanquished evil for seven straight seasons, dressed to impress and never missed an opportunity for a witty remark)

THE TORTURED HEROES OF THE TUBE: they may have their flaws, but these boys have won the hearts of millions over the years
– Alex Karev and Marc Sloan (Grey’s ultimate truth tellers, dirty adulterers and big hearted jerks who would scale mountain tops for the ones they love)
– Jin and Sawyer (Charlie may be a rock star drug addict but these Lost boys take the cake on the seeming villains of the group front. Their abusive behaviour towards the other castaways hides their sentimental and deeply wounded selves that we all know are underneath)
– Tim Riggins and Smash Williams ( Friday Night Lights) they get in a fist fight every week, drink like crazy and sleep around but when it comes down to it Smash will fight for the dignity of anyone he cares about in a moments notice, Riggs will go to the end of the earth to save his best friend, be a big brother to a neighbour, save someone from a tornado or humble himself to apologize- these two bad boys are some of the best good boys on TV.
-Pacey Witter (Dawson‘s best friend who stole his girl. The eternal screw up, the funny sidekick, the big mouthed, under appreciated kid who had an affair with his teacher. Pacey wasn’t set up to be a hero, just comic relief with a little sympathy on the side, but he grew to be one of the most loving, compassionate and adored characters on the show. His unwavering loyalty, earnest goodness and mischievous grin were a winning combination)
– Jeffrey Tennant (Slings & Arrow‘s eccentric artistic director is, well, crazy. but he’s also a genius. a genius who turns the festival around, inspires all those around him and ends up marrying the woman of his dreams- sounds like a Shakespearean dramatic hero to me)
– Logan Echolls (this movie star’s son started out as a pure antagonist who gained depth and inspired pathos as the series continued until viewers were all rooting for him and Veronica Mars to be together forever)
– Dylan McKay (this 90210 surfer dude spent much of season 1 throwing things and drinking heavily. But Brenda’s love tamed him and by the time he graduated high school he had 2 girls fighting over him and an unparallelled knack for his AP English course)
AND THE ULTIMATE LOVEABLE BAD BOY…
– Spike (this high cheekboned, bleached blond, centuries old killer represents perhaps the most dramatic character arc of all time. Journeying from being the cold blooded killing machine Big Bad of season 2, to having a chip implanted in his head in season 4 preventing him from harming humans, to falling in love with Buffy and protecting those she loves in season 5, to being her useful but scorned boy toy in season 6, to attaining a soul and saving the world by sacrificing himself in the series finale, Spike transforms more than any other character I can call to mind. He was one of the most popular characters ever on the series. For someone who’s main goal was once to kill our heroine, that his sacrifice 5 years later was as heart wrenching as it was is truly remarkably– Spike really is the ultimate tragically flawed and unexpected hero of TV.