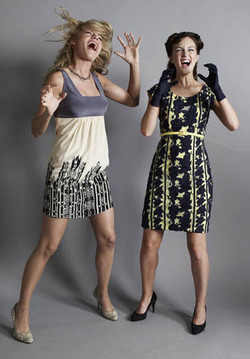 You Know You Love THEM: Gossip Girl XOXO

I am LOVING Gossip Girl. I wish they would post the episodes online faster so I didn’t have to wait until Saturday to watch but the show is sooo great. Its one of those shows that leaves you feeling good by the end, and we all need a little of that in our lives. Besides, as of yet its not sot crazy plot-wise to make it un–relatable like The OC. Its a heightened reality but one to which we can relate at least on some level.

This was an especially important episode (Bad News Blair) for characters that we as of yet were not supposed to like. Serena and Dan have been set up as sympathetic- they’re the heroes, well already love them and probably always will. But Blair and Chuck have been the antagonists of the story until now. While it was really Serena that pulled out all the friendship stops in regards to the Waldorf photo shoot, the audience got a better glimpse into Blair’s insecurities and the reasons behind her behaviour. We got to see a bit of what used to be there between her and Serena and the knowledge that as much as she hates Serena, she really loves her.

Similarly, Chuck is a jack-ass. He’s a jerk. He’s a philandering, doped up, drunkard who sees women as objects and wealth as a descriptor of merit. But his friendship with Nate clearly parallels that of Serena and Blair. They’ve been together forever and will not be splitting up any time soon. They hate each other and disagree on most things but it wasn’t that baseball that Chuck went to the poker game to get back- it was Nate.

Gossip girl is pulling out all the stops in trying to be more than just a teen soap. Like Seth and Ryan’s was, the 2 central friendships in Gossip Girl are the heart and soul of the show and give it a legitimacy that extends beyond its frolicking teenagery ways.

It seems that even the most villainous of villains can be redeemed when you see them with their best friend.